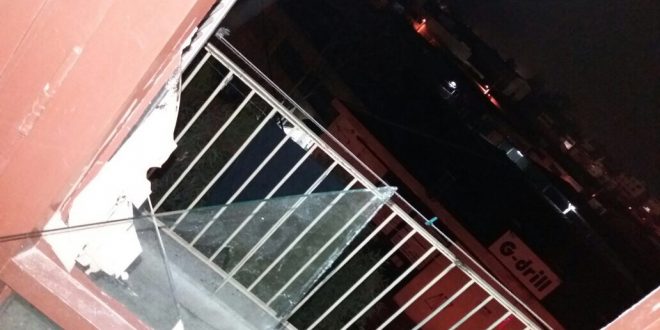 Racist attacks against migrants from Pakistan surge after Christmas (video)

January 7, 2018 Refugees Comments Off on Racist attacks against migrants from Pakistan surge after Christmas (video) 306 Views

Racist attacks targeting homes of migrant laborers have surged in neighborhoods of Piraeus over the Christmas days, Greek anti-racism activist group KEERFA has said. More than 30 homes where mostly migrants from Pakistan have been living became the target of racist attacks since the Christmas day, December 25th 2017.

In the video, Mohamed Icat shows the broken windows in his home and says “they came at night, around 11 o’ clock and started to throw stones and oranges, shouting insults.” The attackers sprayed also insults and anti-Muslim slogan on the walls outside the building, some of them even in Arabic.

KEERFA director Petros Constantinou sais that “raid squads of Golden Dawn have return to action, they try to spread fear again because the trial is proceeding and they will be convicted but they want to send the message to their supporters and the organization hardcore that we are here and we are here with attacks.”

According to KEERFA, the attack squads operating in the neighborhoods of Nikaia and Renti consist normally of young people.

In one attack incident it was a group of  people aged 18-22 with majority of them wearing hoods. when the migrants asked them why they are doing this they told him “Dirty-Pakistanis, go home!”

Another attack victim said that a car with an elderly driver collected the attackers.

A Pakistani shop-owner in the area says that his shop gets attacked almost every night by people dressed in black who claim they belong to Golden Dawn.

There have been dozens of attacks in a period of 40 days KEERFA and members of the Pakistani community say. the express the suspicion that the young members of the squads are being training to attack homes and shops of migrants.

The squads are reportedly patrol in specific areas where many migrants live and the attacks follow a pattern of throwing stones and bitter oranges, smash windows and doors with sticks, shout and spray racist slogans.

So far nobody has been injured.