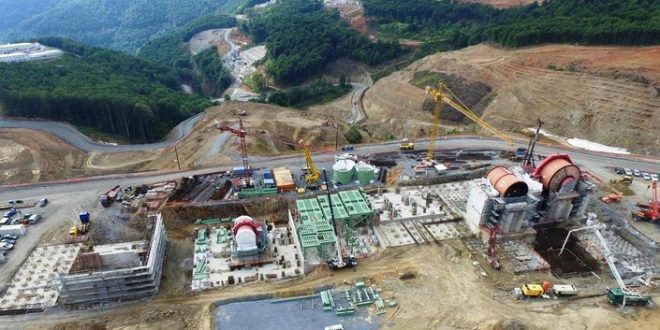 Shares in Eldorado Gold were slightly up on Tuesday after the company announced full-year production that came in line with production guidance, but suspended its semi-annual dividend payment “pending the results of the technical reports and potential subsequent capital requirements.”

In a press release, the Vancouver-based miner revealed that, including pre-commercial production from the Olympias project in Greece, its gold output was of 285,919 ounces in 2017, while the revised guidance range was of 280,000 to 310,000 ounces. All-in sustaining costs are expected to come in at ~$900/oz., also in-line with the revised guidance.

The company reported that it also produced 7,061 ounces of gold in the fourth quarter from a bulk sample at its newly acquired Lamaque project in Quebec. Pre-feasibility and construction works are already taking place at the eastern-Canada mine, in parallel with the refurbishment of the associated Sigma mill, Eldorado stated.

One of the reasons why 2017’s output did not surpass the guidance was that the firm’s flagship gold mine in Turkey, Kisladag, produced 171,358 ounces when its guidance was between 170,000-180,000 ounces of gold at cash costs of $500-550 per ounce. The flat result was caused by lower than expected recovery rates and slower leaching from sections of the leach pad. Average ore grade placed on the leach pad during the year was 1.03 grams per tonne gold and the average cash operating cost was $500 per ounce.

In Greece, despite the fact that the Olympias Phase II project achieved commercial production by the end of last year, the company had to deal with a legal arbitration started in September by the Greek Ministry of Finance and the Ministry of the Environment and Energy. Both government agencies allege that the technical study for the Madem Lakkos Metallurgical Plant for treating concentrates from the Olympias and Skouries mines was deficient and therefore in violation of the Transfer Contract and the environmental terms of the project.

Also in Greece, Eldorado saw a slowdown in its Skouries project due continued permitting delays. In response, the company announced its intention to move it into care and maintenance and expects to fully ramp it down in Q1 2018.

“2017 was a year that was overshadowed by political headwinds in Greece and technical challenges at Kisladag,” said the company’s President and CEO, George Burns, in the media brief. Burns added that 2018, although starting up as a busy year, is expected to generate positive results given the new or updated technical studies underway at the Lamaque, Skouries and Kisladag sites. “Our overarching goal for 2018 and beyond is to move Eldorado back into a growth phase and create value for all our stakeholders,” he added.

Since metallurgical testwork on the Kisladag orebody is still underway, Eldorado decided to provide partial operating and financial guidance for 2018, with the promise of notifying full guidance at the end of the first quarter. “Full year gold production of 160,000-190,000 ounces is expected from Olympias Phase II, Efemcukuru, and pre-commercial production at Lamaque, in addition to base metal sales and by-product credits from Stratoni and Olympias Phase II production respectively,” the company declared. source: mining.com