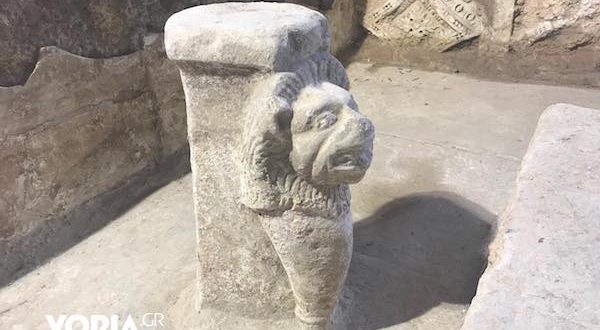 Works for the Metro in Thessaloniki have revealed the secret diamonds of Early Christianity buried for centuries under  surface of the city. Local media Voria.gr visited the future metro station in  “Agia Sophia” in the center of the city and brought amazing footage for the delight of a broader audience.

The fountain building is the largest monument found in excavations in Thessaloniki and is estimated to be one of the largest in the Ancient Roman world.

It was built in the 4th century AD. It underwent several construction phases showing that in was in use for several hundreds of years and was the central source of water supply in the center of the city until the 7th century AD.

In its first construction phase, along a straight wall, two rows of semicircular, rectangular and ellipsoidal holes were placed. From some holes the water flowed into the large reservoir of the fountain, while some others were used only for decorative purposes as they hosted statues. In later phases, the fountain gained shape of a Greek “Π,” it was lifted and the water fell from a higher point first to basins with rich reliefs and then to the water tank.

The excavation findings during the Metro works have not only delayed its construction but also set archaeologists and engineers in front of crucial questions: How to keep important monuments intact, have construction works keep up with the deadlines and keep the budget under control.