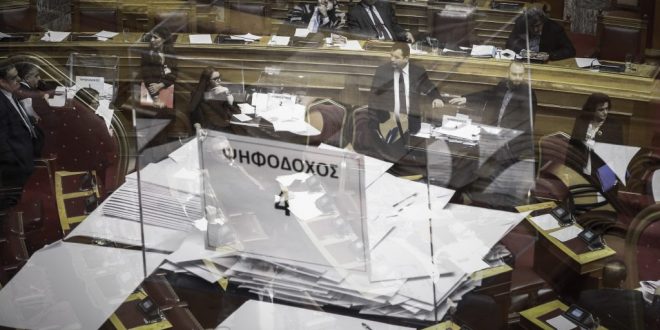 After a plenary debate that lasted 18 hours, the majority of Greek lawmakers voted in favor of setting up a parliamentary committee to investigate two former prime ministers and eight former ministers over allegations of bribery and money laundering by Swiss drugmaker Novartis. Majority of votes was received by EU Migration Commissioner, Dimitris Avramopoulos, the least by deputy Health Minister, Marios Salmas.

All 10 politicians, with the exception of Avramopoulos who was in New York, took the floor and denied allegations describing them as a ‘fabrication’, ‘conspiracy’, ‘plot’ and ‘witch-hunt’ orchestrated by SYRIZA to discredit them ahead of the parliamentary elections in 2019.

It was especially the former Health Ministers who declared they managed to bring order in the chaotic expenditure in the health sector and achieve significant expenditure cuts.

The politicians from conservative New Democracy and socialist PASOK declared themselves as “innocent”.

It was short after 3:30 on Thursday morning, when the speeches concluded and ten ballot boxes, one for each of the named politicians, were set up. The coalition government of SYRIZA-Independent Greeks (ANEL) had brought the case to the Palriament with the request for a parliamentary inquiry as the former PMs and Ministers are protected by the Law on Ministers’ Responsibility.

The politicians who have been named in the Novartis case file prepared by corruption Prosecutor are:

In favor of the probe of the ten politicians voted: SYRIZA, ANEL, Communist KKE and far-right Golden Dawn.

Although MPs from major opposition party New Democracy declared “Yes to preliminary inquiry” they did not cast votes. The party’s attitude is considered as refraining from the voting.

Democratic Alignment (PASOK) and To Potami cast their own ballots reading “Yes to inquiry (with full authorization according to Constitution and the Parliament Statute). Their votes counted as “invalid.”

The politician who gathered the majority of votes is EU Commissioner and former Health Minister Dimitris Avramopoulos (ND).

The least votes were collected by former deputy Health Minister, Marios Salmas (ND). He was declared his innocence, however, he brought evidence of irregularities in the time period he served as minister. ANEL-leader, Panos Kammenos, had said that he would not vote in favor of Salmas’ probe in order to facilitate his testimony to FBI. Salmas received also the majority of “Against” votes (17).

The ballot boxes had no names but numbers.  No 1 Avramopoulos, No 2 Venizelos, No 3 Georgiadis No 4 Koutroumanis N0 5 Loverdos No 6 Lykourentzos No 7 Pikrammenos No 8 Salmas No 9 Samaras No 10 Stournaras

Chart Below: ΥΠΕΡ = In favor 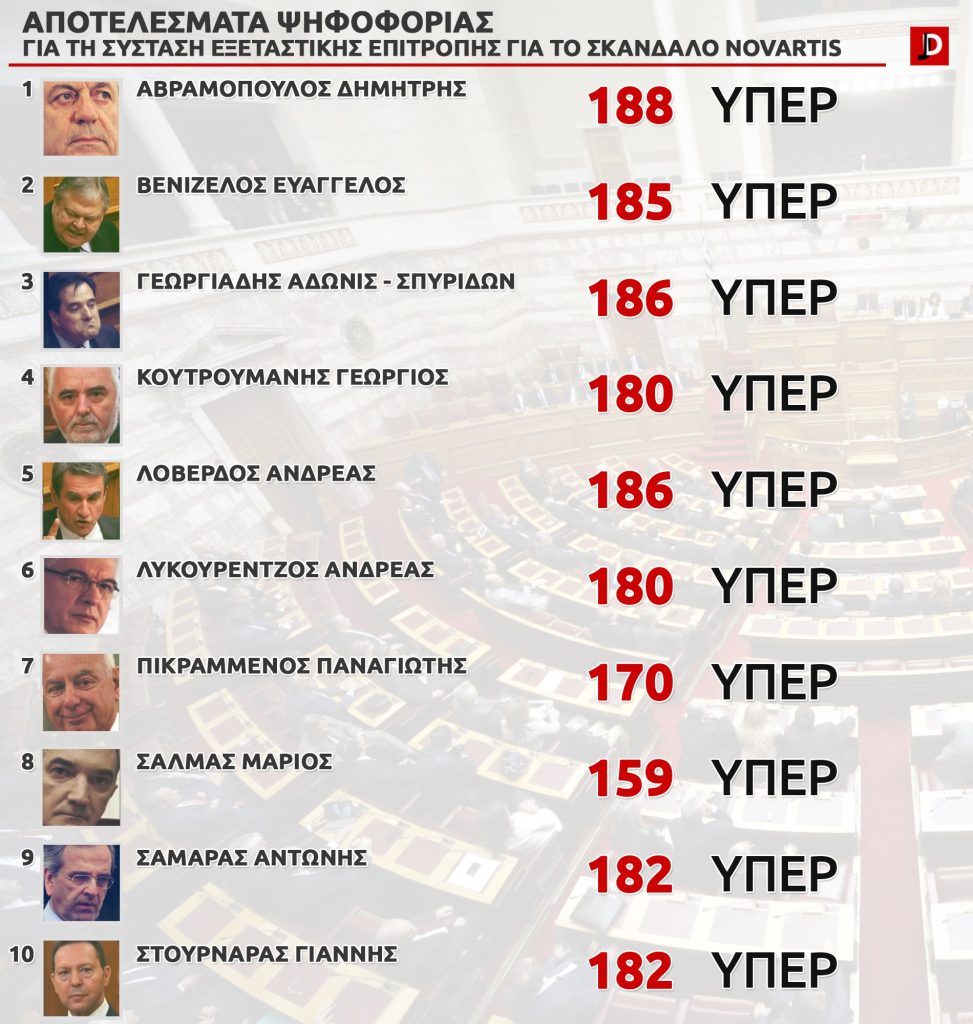 The parliamentary committee to investigate the issue will have one month to prepare its report.

From the 21 committee members 10 will be from SYRIZA, 5 from New Democracy and one from every other political party in the Parliament.

The Novartis bribery case has triggered an earthquake in the Greek political landscape. The loss for the state caused by overpricing and bribes by Novartis is estimated to be 3 billion euros for the time period 2009-2015, amid the hardest economic crisis that ever stroke Greece.