Breaking News
Home / News / Politics / Is the statue of US President Harry Truman “the most hated” in Athens? 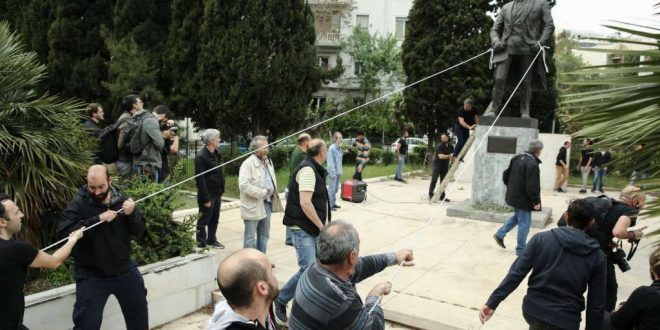 Is the statue of US President Harry Truman “the most hated” in Athens?

Two days after the attempted vandalism on the statue of former US President Harry S Truman in downtown Athens, US Ambassador to Greece, Geoffrey Pyatt went to check whether the statue was still standing unharmed in its position. “The statue is a symbol of our alliance,” Pyatt said and had a photographer shooting pictures of him next to the statue.

As soon as I returned from from Mt.Athos, I stopped by to check on the Harry Truman statue – a symbol of the US-Greece alliance and a reminder of the American people’s generosity during Greece’s darkest days. pic.twitter.com/gIyZJJ61BI

Pyatt’s visit comes a day after general secretary of Communist party KKE, Dimitris Koutsoumpas, told ANT1 that “Harry Truman was the most hated US President” because of the two Atomic bombs in Nagashaki and Hirosima in August 1945, for using Napalm bombs against Greek civilians during the Civil War 1946-1949 and for orchestrating the Cold War” as he claimed. For many left-wing and socialist Greeks, the US was behind the Colonels’  coup d’ etat that put the country in the gyps for whole seven years, from 1967 until 1974.

During a protest against the US-led strikes in Syria on Monday, students and unionists of KKE attempted to bring down the Truman statue.

On internet times, the news spread quickly and some were shocked to see the vandalism that bordered a sacrilege.

However, it is not the first time, the Truman statue is targeted by anti-American protesters – and possibly it won’t be the last. 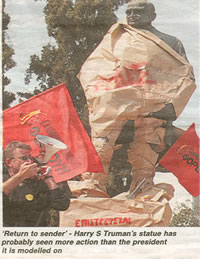 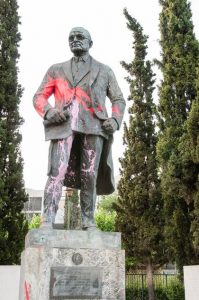 Standing in a central place a few dozens meters away from the US Embassy in downtown Athens, the statue has been been vandalized dozens of times, since it was erected in the early 1960’s. 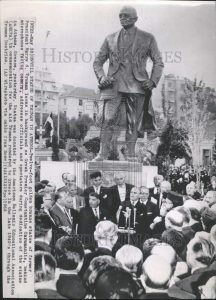 Funded by the conservative Greek-American AHEPA organization, the statue was erected without the consent of the Municipality of Athens in 1963. Its troubles started a little later. Harry Truman in bronze has been toppled four times in its 55-years of existence and often painted with pink or red colors, while its feet were sawed at least once. 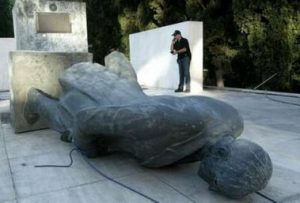 During the Colonel’s dictatorship the statue was bombed with explosives twice. The second time in 1971, the explosion caused the death of one policeman.

In March 1986, a powerful explosion teared the statue apart. The Ahepa offered to fund reconstruction. then Mayor of Athens, Dimitris Beis, proposed the statue of Abraham Lincoln. But Truman and Ahepa won.

A year later, a local urban guerilla (ELA) exploded the statue after having painted red.

In 1997, unknown perpetrators cut the Truman’s legs with a chainsaw. The statue was restored on the occasion of US President Bill Clinton in Athens in 1999.

During a protest in 2007, Harry S Truman was brought down with ropes. And was restored again.

Still several Greeks consider the Harry Truman statue as a ‘double offense’ for the Greek people.

On the occasion of the vandalism attempt on Monday, a debate erupted  on social media. With the main main question to be: Why is there a statue of Harry S Truman in Athens on first place, “when there is not statue of him even in his own hometown”?

And some say, why there should be a Truman statue when there is no statue of Alexander the Great?

I do cannot tell if the Truman statue is ‘the most hated in Athens’ or ‘an offense for the Greek people’ or just ‘red cloth for the communists’ eyes’. However, I could suggest that Harry S Truman in bronze may have had quieter days had stood in a less noticeable place, on a small square or park somewhere outside the city center. He would have more chances to escape the wrath of politicized Greeks.