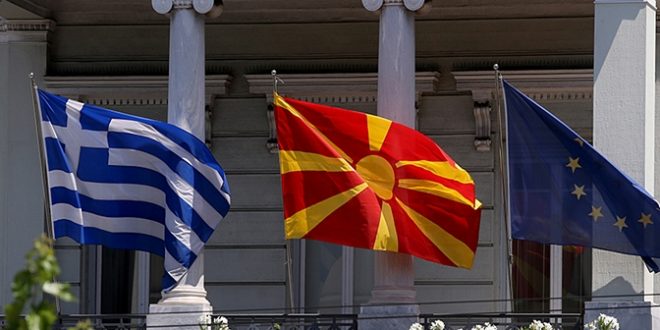 Severna Makedonija, North Macedonia and Βόρεια Μακεδονία : The historic agreement the prime ministers of Greece and FYROM agreed upon may have been hailed by international organization but made a large portion of Greeks furious. They call the agreement a “national defeat” and are angry about the concession of term “Macedonia” to the name of the neighboring country in the North.

And that’s not the only concession. FYROM will be allowed to use the “Macedonian” language and identity even if the two terms will be used with explanations like “Macedonian language with Slavic origin” and “citizens of the Republic of North Macedonia without claims to the ancient Macedonian culture.”

“The name contains a geographical qualifierterm, erga omnes, that is for all domestic and international purposes,” Alexis Tsipras said in his address to the nation on Tuesday night, short after his FYROM counterpart, Zoran Zaef, called him to say he had chosen a name for his country: Republika Severna Makedonija in Slavo-Macedonian dialect, Republic of  North Macedonia translated in English and  Δημοκρατία της Βόρειας Μακεδονίας  translated in Greek.

According to the agreement information leaked so far, KTG understands that Greece did not manage to succeed in having FYROM using Severna Makedonia “mainly untranslated” for all purposes.

For many Greeks, all these notes and side-notes, explanations and limitations may mean something on the papers and on the future revised Constitution of FYROM, but they mean fairly mean nothing in real Greek hardliners’ life.

By allowing FYROM to use the term “Macedonia” in whatever language one may use, they believe that the proud and eternally Greek Macedonia has been sold out to the foreigners.

Language is a bitch

“When there is North Macedonia, does it mean we are now in South Macedonia?” many Macedonians ask on social media. But the question is asked in Greek where word “Βόρεια” is commonly used for both “North” and “Northern” (northernmost which is actually βορεινή in Greek)”

In the Greek administrative language there is only Western, Central and Eastern Macedonia.

Oil in the fire of confusion and the angry nationalistic sentiment is added by several international media that mistakenly write “Northern Macedonia” instead of correctly “North.”

Northern Macedonia purposes that there is also a Southern one but there isn’t any. Neither geographically, nor administrative, nor FYROM-wise.

Macedonia is and remains Greek

…If only it wasn’t for several international organizations including the European Union, the NATO and others, that have been calling the Former Yugoslav Republic of Macedonia simply as Macedonia in the last couple of years. They could have continuing calling it FYROM as they did in the first two decades of the name dispute.

But in the last couple of years, the NATO, the EU, Berlin and Washington mainly, revived their geo-strategic plans in the Balkans with the aim that FYROM becomes one of their members. For this purpose, Greece had to lift its accession embargo and had to find  a solution to FYROM’s name.

Hardliners here and there

So far, Skopje looks as if it has made more concessions than Greece in order to reach an agreement. It has removed statues of Alexander the Great and renamed airports and highways. It is willing to revise its Constitution and erase all irredentist ambitions.

Yet, Greek patriots believe that Greece lost and FYROM won.

It is worth noting that although Zaef secures the term “Macedonia” in the country’s official name, FYROM’s hardliners threaten to take him to jail for “high treason.” Apparently for having given up the “ancient Macedonian identity” they claimed they had although they never did. Hardliners in FYROM are furious because they abandon their historically false claim to be descendants of the greatest Greek ever, Alexander the Great.

On the other part of the Greek-FRYOM borders, Greece’s hardliners accuse Tsipras and foreign Minister, Nikos Kotzias, of being “traitors” as well.

For Greek hardliners the issue is clear: Macedonia is Greece, as they say. Not matter whether the international community, the officials and the media, have been calling FYROM  as Macedonia for quite some time.

Fact is that the international community will continue to call FYROM Macedonia even if Zaef’s referendum fails.

Does anybody believe that although FYROM will be obliged to use Severna Makedonija nationally and internationally, the world will call it “Republika Severna Macedonija” or just RONM in English or just RSM?

If somebody believes so, this somebody pretends to be an ostrich hiding its head in the sand.

Apart from the uses of the names that its’ all Greek not just to me, one question that should be answered is this:

For sure it is a personal victory for Alexis Tsipras and an upgrade of his position in the eyes of the international community. He is already being praised as a ‘visionary statesman’ by those who have being insulting him and treating him as a pariah ever since he came into power in February 2015, i.e. the European Union and the German media.

The text of the Greece-FYROM agreement has not be published yet. So it remains to be seen whether we will call FYROMians and Skopjians as “North-Macedonians” and whether products “Made in Severna Makedonija” will carry the name “North-Macedonian” or “Macedonian.” Suspiction is close that the whole issue will lead to ultimate trade confusion and the EU will have seriously to deal with it mainly due in terms of products of protected origin.

As I said: Language is a bitch, a real bitch. Some foreigners lacking political and historical knowledge on the matter think that the FYROM-Macedonia issue had to do with a partition or division of Greece’s Macedonia.

One day, tourists may book for Halkidiki in Greece’s Macedonia and find themselves in Skopje…