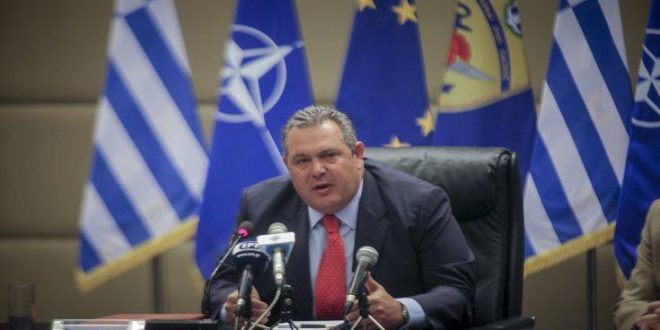 July 3, 2018 Greece, Politics Comments Off on Kammenos warns “either elections or referendum or 180 ratification votes” for Macedonia Agreement 221 Views

The Macedonia Agreement will not be ratified without the consent of the people, Tsipras’ junior coalition partner ANEL said on Tuesday morning. In a press conference called early in the morning, ANEL leader and Greece’s Defense Minister, Panos Kammenos said there has to be either elections or a referendum on the Agreement signed between Greece and FYROM in Prespes on June 17.

“The people will decide unless the ratification is done with the votes of 180 lawmakers, unless New Democracy and PASOK change their attitude, then there is nothing we can do against,” Kammenos said.

“I want to make clear that the ratification will not come to the Parliament without people’s consent. The people will decide, unless 180 lawmakers will approve it,” he stressed.

Theoratically the government can ratify the Macedonia Agreement with the simple majority of 151 votes in a Palriament of 300.

“If the government attempts to ratify it with 151 votes, I will withdraw my support, I will go to the President of the Republic, announce my decision and we will go to elections,” Kammenos warned.

“The Agreement is not good and I will do anything in my power to hinder it,” Tsipras’ coalition partner underlined.

ANEL does not agree that the new name for FYROM – Severna Makedonija or North Macedonia –  contains the term Macedonia.

The Agreement is not binding until its ratification in the Greek Parliament, he underlined.

He added that all conditions in the Agreement are conditions that have to be met by Skopje.

Among others, Kammenos said that he will accompany Prime Minister, Alexis Tsipras, at the NATO Summit next week. “There can’t be any procedure at the NATO before the referendum in Skopje and the Agreement ratification in the Parliament,” he stressed.

It should be noted that at the Summit the NATO is expected to officially invite FYROM to join the North Atlantic Alliance under its new name.

Can Kammenos force snap elections if withdrawn from the coalition? Not necessarily. Maybe SYRIZA will have found another coalition partner.

PS Maybe Kammenos will be at the NATO cafeteria while the Secretary General is speaking out the invitation to FYROM.