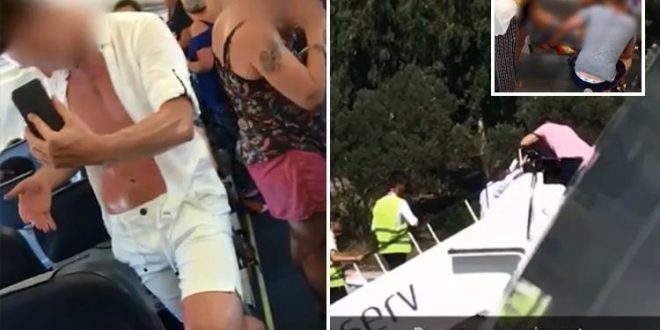 More than two hundred passengers on a flight from Zakynthos (Zante) to London experienced the hell on earth, a living nightmare, at the airport of the Ionian Sea island. 214 passengers of Thomas Cook Flight MH1805 had to stay on the ground for three hours in a plane without air conditioning. Sunday noon, outside temperature on Zakynthos was at 30 degrees Celsius.

Thomas Cook passengers fainted and vomited while ‘trapped’ on a plane for three hours with no air conditioning. People on board included pregnant women and mothers with young children who began to ‘melt’ as the air conditioning unit failed and temperatures soared to as high as 40C, it was claimed.

One person even suffered a panic attack, a witness said.

Footage from inside the plane shows exhausted passengers covered with sweat; video shot by passengers and uploaded by the mix club

Flight MH1805 was expected to depart from Zante, Greece, for London Stansted airport at 2pm on Sunday.

Travellers say they were originally told the plane needed to be refueled resulting in an initial one hour delay to the flight.

Passengers told The Sun, that they were repeatedly told they were taking off in a few minutes, and forbidden from leaving the grounded plane.

But the delay extended and the passengers were trapped inside the plane for three hours without water supplies, resulting in many passing out and throwing up. 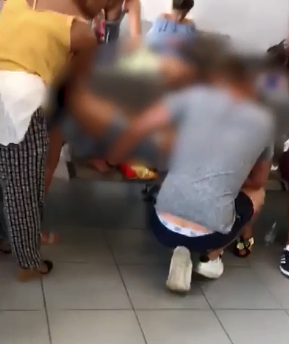 At least two were taken to hospital with ambulances.

@TCAirlinesUK @ThomasCookUK nobody minds a delay, things happen, but keeping people in a tin can in 40 degree heat so that people are passing out and throwing up is taking things a little far don’t you think ???

@ThomasCookUK can you give me some info as to why my friends flight has been delayed.They were stuck on the plane for two hours with no water or air con & have since been pulled off. People have fainted because of the heat. No info from your reps. Flying from Zante to Stanstead

Some six hours later, the flight was cancelled and the exhausted passengers were taken to local hotels and other forms of accommodation. Many complained about the conditions there about “lack of air conditioning” or of “shower.”

The flight took off on Monday morning with a 19-hour delay.

Thomas Cook apologized for the discomfort the passengers experience and said that it would look into individual complaints.

In a statement company said: “Flight MT1805 from Zante to Stansted was delayed due to a technical issue with the on board air conditioning.”

“We tried to fix the issue so that we could get customers on their way as soon as possible, but we recognise that we should have disembarked the aircraft earlier.”

“All customers will be given a letter of apology with detail on their entitlement to compensation, ” Thomas Cook said according to thesun.

On Tuesday, one passenger, a 17-year-old teenager girl described to media the horrible experience, saying she fainted after struggling to breathe.