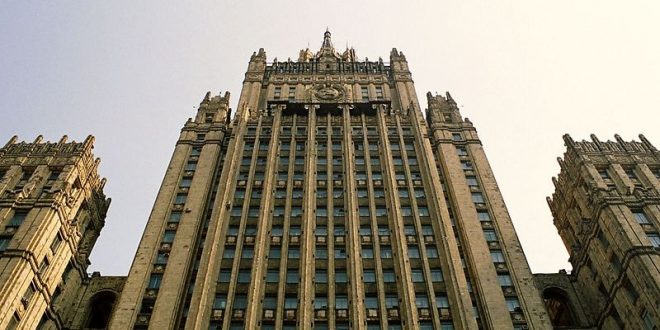 Russian FM: US clearly behind Greece’s decision to expel diplomats

Τhe expulsion of two Russian diplomats from Greece is unfounded and could seriously damage bilateral relations, the Russian Foreign ministry said on Friday. Moscow’s reaction comes a day after the US State Department said in a statement it supports Greece against “malicious Russian influence.”

“It appears that Washington, which openly supported these actions in the statement made by the State Department, is behind this anti-Russian move by the Greek government, timed specifically to coincide with the opening of the NATO summit,” the ministry said according to Russian media.

The Russian Foreign Ministry stated that the Greek side had provided no justification for the expulsion of the Russian diplomats from Greece, emphasizing that Moscow considers the incident absolutely groundless.

“We consider this action to be absolutely unreasonable, not confirmed by facts from the Greek side, which runs counter to the nature of our bilateral relations and is capable of inflicting serious damage,” the ministry said in a statement.

The Foreign Ministry in Moscow summoned the Greek envoy to Russia on Friday to protest the expulsion of two Russian diplomats.

Russia has warned of a reciprocal action and that two Greek diplomats will be expelled from the country.

Greece accuses them of having funded protests against the Macedonia Agreement with FYROM.

The Russian Foreign Ministry has apparently one more reason to be angry after a court in Athens accepted the French request to extradite there “Mr Bitcoin” Alexander Vinnik. In a statement the ministry said this will deteriorate further the relations between the two countries  “due to foreign pressure” and noted that Greece ignored the Russian extradition request.