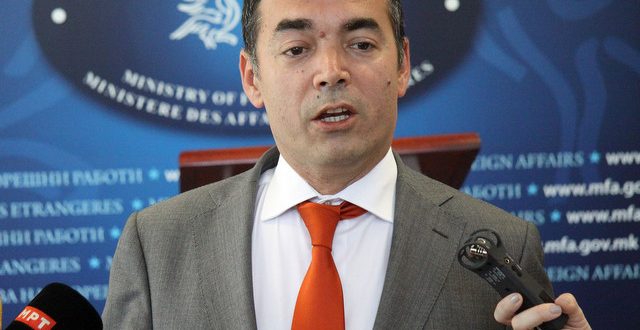 Greece angrily reacts to FYROM FM saying “I am Macedonian”

“I am a Macedonian,” FYROM Foreign Minister Nikola Dimitrov said during a hearing at the European Parliament foreign affairs committee in Brussels on Wednesday.

Dimitrov had responded to a question posed by New Democracy MEP Manolis Kefalogiannis who asked how his people are going to call themselves after the Prespes/Macedonia Agreement. The conservative MEP from Greece’s main opposition party stressed that “Macedonian identity and Macedonian language cannot be accepted by Greece.”

“I am Macedonian,” Dimitrov replied. “When the agreement comes into force, my country will be called North Macedonia and we will be Macedonians speaking the Macedonian language.”

He added that term “Macedonian” has different meanings and said there are also “Macedonian in Greece.”

He added also that there is a distinction between the country and the region of Macedonia and that this distinction was erga omnes, i.e. for all purposes.

“I will speak Greece as I am Greece and I descent from Macedonia, ” MEP Eva Kaili (PASOK) said. “As you understand it will require constant clarification of these issues of identity that arise from mistakes and omissions of our current government, but also we will likelt face problems with regards to our Macedonian products and the use of the term,” she added.

“The combination of the name North Macedonia’, ‘Macedonian’ and ‘Macedonian’ ethnicity is the greenhouse for the development of Skopje’s nationalism and irredentism,” ND MEP Giorgos Koumoutsakos said.

Also Defense Minister reacted to the statement even though with a delay. “The reference to a Macedonian nation is against any agreement, what they manage is to anger the Greek people,” Kammenos said adding that such provocative statements against Greece undermine any effort for a solution. Leader of Independent Greeks and Tsipras’ junior coalition partner has said several times that he is against the Macedonia Agreement and threatened to down vote it or even leave the coalition when it comes to ratification at the Greek Parliament.

Meanwhile in FYROM, the name deal is gaining ground a month before the referendum asking whether they want the country to join NATO and the European Union. In a recent poll, 57% of respondents said they fully or partially support the name deal, while 38% said they do not.