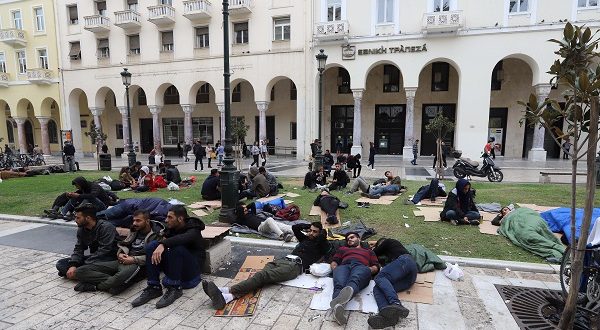 Dozens of migrants from Iraq and Iran have been camping on the main square of Thessaloniki  and outside the police station awaiting to be arrested. Once arrested, the police  can give them the necessary documents so that they can apply for asylum, many of them told local media.

Families with children, young and old, some 50 migrants have been camping in the last couple of days outside the police station. They sleep on blankets and sleeping bags or just plane carton sheets.

It is the traffickers who tell them to stage this action in order to accelerate procedures, state broadcaster ERT TV reports on Monday morning. 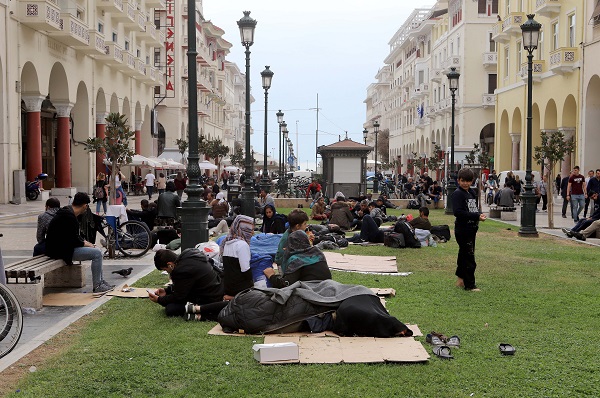 Not all of them want to apply for asylum as they do not want to stay in Greece but move further to Central and North Europe. 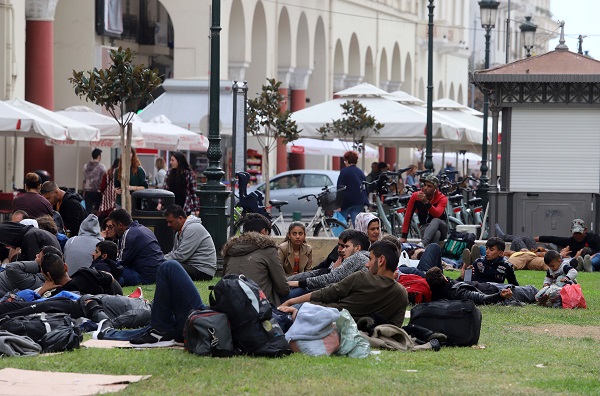 What they reportedly want are identification papers.

Some of them have arrived recently to the country after they illegally crossed through the Evros River, the natural border with Turkey.

Others stay in the reception center of Diavata, where last week violent clashes between Iraqi Kurds on one front and Afghans, Moroccans and Algerians on the other. A 31-year-old Iraqi was stabbed in his ribs and was transferred to hospital.

“We stayed for a couple of days in Diavata but the situation is very bad there,” the family of migrant Mahmoud told voria.gr. “We have been sleeping on the camp ground,” the family complained.

Local authorities reportedly claim the police stations are full and there is no place for this group of people.

It is the absence of political leadership that turns Aristotelous Square into a hot spot,” local media comment on the situation adding that it harms the image of the city, the second biggest in Greece.

The Migration Ministry tries to find a place to temporary accommodate them.

The EU Turkey Deal of 2016 has stranded thousands of migrants and refugees in Greece and has halted only their further journey to Central and North Europe. Living conditions in many reception centers are appalling and outbreaks of violence are often among the frustrated

The EU Turkey deal has in no way stopped the influx of economic migrants and refugees in Greece.

Especially in Northern Greece, the incidents where police arrests traffickers transporting migrants is a frequent phenomenon.

On Sunday, two traffickers transporting seven migrants were caught in Thessaloniki were arrested after a movie-style car chasing on Egnatia highway that ended almost in the center of the city.

The car with Bulgarian license plates crashed into a motorcycle and another vehicle, dozens of policemen were chasing it and at some point police fired in the air to stop the traffickers’ car.