With four days delay, Turkey told Greece that it will not allow extension of territorial waters to 12 miles without Ankara’s consent. And this although Athens does not plan to extend its sovereignty in the Aegean Sea but in the Ionian Sea and south Peloponnese.

The Turkish Foreign Ministry summoned Greek Ambassador to Ankara over the issue on Tuesday noon, Turkish media report. The Greek Foreign Ministry, however, says that the meeting was scheduled already on Friday, a day before now Foreign Minister Nikos Kotzias revealed the extension plans.

Turkish Foreign Ministry spokesperson told media on Tuesday, “it is not possible to tolerate the [extension ]steps if there is no bilateral agreement on the Aegean, where the two countries have mutual shores.”

The spokesperson reminded of the casus belli – act of war – decision by the Palriament in 1995 saying “the declaration of the Grand Assembly dated 8 June 1995 has the necessary political warning in this context and it still maintains its validity today.”

He added “our opinions and warnings about the issue were also forwarded to the Ambassador of Greece to Ankara.”

Last Saturday, outgoing Foreign Minister Nikos Kotzias revealed  that Greece will extend its territorial waters from 6 miles now to 12 miles from the coastline in the Ionian Sea and South Peloponnese.

Territorial waters give the littoral state full control over air navigation in the airspace above, and partial control over shipping, although foreign ships (both civil and military) are normally guaranteed innocent passage through them.

Kotzias said that the extension refers to the area from the island of Othonoi in the North Ionian Sea to territorial waters from Antikythera in South Peloponnese to Crete. This is the first stage Kotzias said, adding that that also the territorial waters will in the Saronic Gulf and Evia will be measures in the future.

And this is the point where Ankara has its objections as it considers the waters off Evia as waters in the Aegean Sea.

“The country is extending itself to 12 miles, except in the narrow places where we will go with the principle of the middle line,” he said.

This would also make things easier for Greece in deciding its EEZ with Italy and Albania, he added, clarifying that Greece was extending its sovereignty in this way because these were not sovereign rights along the lines of the EEZ but represented regular “territorial sovereignty”.

Prime Minister Alexis Tsipras who is now Foreign Minister is expected to make a statement on the issue.

Greece’s territorial waters in the Aegean Sea look currently -6 miles – like this: 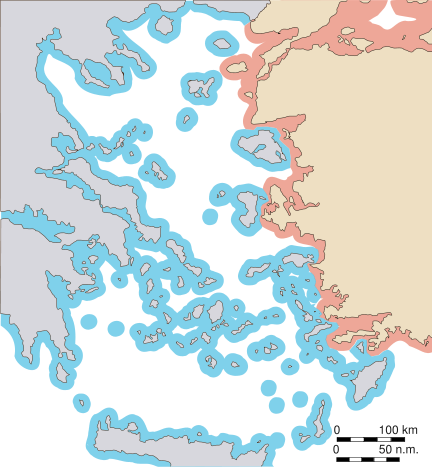 Should Athens extend them to 12 miles, they would possibly look like this: 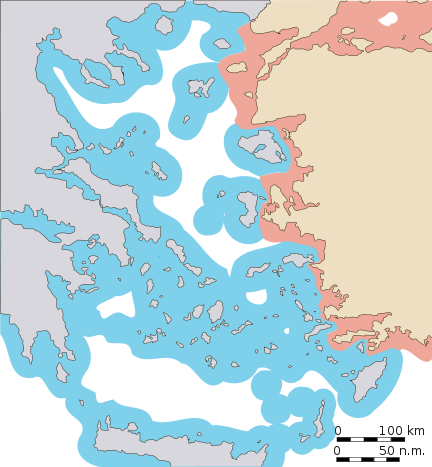 Kotzias did not mention any extension in the Aegean Sea. However, Ankara’s first objection is the extension of waters in Antikythera to West Crete.