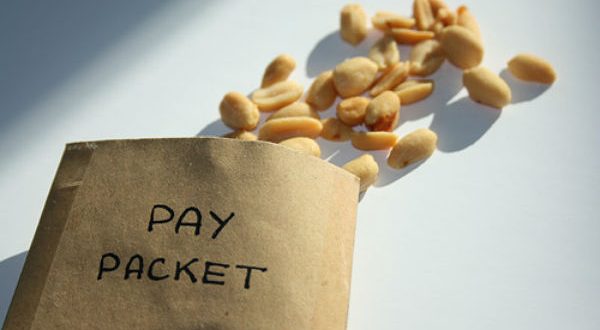 Greece’s lenders agree to increase of minimum wage: a bag of peanuts

January 23, 2019 Economy Comments Off on Greece’s lenders agree to increase of minimum wage: a bag of peanuts 212 Views

Representatives of Greece’s lenders have reportedly given the green light for the increase of the minimum wage, an issue Prime Minister Alexis Tsipras has long promised to materialize.

During a meeting with Labor Minister Efi Achtsioglou on Wednesday in Athens, the lenders have reportedly recommended a “cautious increase” in the minimum wage of just 5% to 6% and not 10% as the government would like to.

Lenders have argued that the rate of growth should be directly linked to the average productivity of the Greek economy and take into account the unemployment rate as not to shake the labor market to the excesses of the past. They consider a 10% increase as “excessive.”
In other words, the lenders want the minimum wage to rise from €580 euros gross by €29 if 5% or  €34.8 if 6% increase.
As these amounts are gross, the lucky employee will be in position to cash a 20-euro bank note net or 25 euros.
The 10% increase would grand  the employee with €58 gross or €30-35 net.
the final decision is to be taken next week, when both sides agree, the ministerial decision will be signed and published immediately.
The increase will be retroactive from 1. January 2019.
PS I dare suppose that none of the lenders has to come through the month with 580 euros gross or 480 euros net. Not even the apprentices in the lenders’ institutions earn so little….