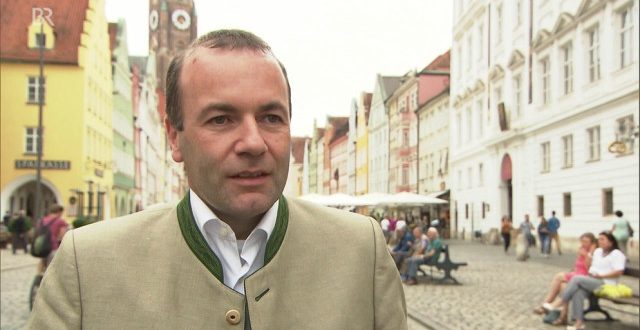 “We need a new government in Greece,” said Manfred Weber, chariman of the European People’s Party (EPP) at the European Parliament and canditate of his group for the European Commission Presidency.

Holding a joint press conference with New Democracy leader Kyriakos Mitsotakis, the arch-conservative German politician from Bavaria seemed certain of a victory for ND in the next elections.

Weber attacked the government and Alexis Tsipras personally not only about his economic policy but also about his stance on Venezuela.

He accused the Greek Prime Minister of “failing to keep his promises” and expressed his confidence that the citizens would not believe his promises.

“We need a new government in Greece,” he said, reiterating that his key message is “No one should leave his home or his country for economic reasons.”

He probably said more important things that we here are too busy to translate and post. But he tweeted:

In Greece with my friend @kmitsotakis of @neademokratia to discuss our common economic challenges. Populists on the left and right don't create jobs, they destroy them. We have a plan for investment and innovation that will give people perspective again. #betterEurope pic.twitter.com/FoEJJLyoNn

Despite his sound lack of knowledge about Greek politics in the last 10 or even 20 years, Weber is right about one thing. Not only “left” but also “right populists” like the EPP, the CDU and the CSU have indeed destroyed jobs. Had he a better knowledge of the economic crisis year, he would have known that the big immigration for jobs abroad started in 2011 and continued also in 2012, 2013 and 2014, when his friends of New Democracy were in power.

BTW: What does Weber mean with “we” when he says “We need a new government in Greece?”

Sadly, we see here that German arrogance and Lebensraum-mentality are still alive and kicking in Brussels.