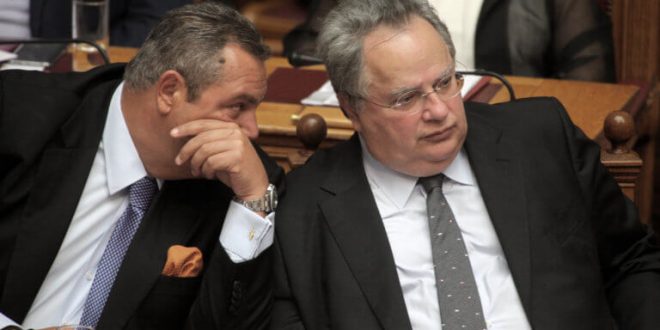 Kotzias sued his former colleague in the SYRIZA-ANEL government for a series of offenses, such a physical and moral incitement, defamation and direct synergy to a threat, spreading false news also against a political body and or the government.

Moreover, Kotzias made reference to earlier lawsuits he had filed when he received threats messages while he was negotiating the Prespes Agreement. He also declared a civil action with a reservation for financial compensation for the moral damage he suffered as a result of these acts.

According to the former FM, the actions were “personalized against him, with open blackmailing and threats against him and his family via hundreds of letters, telephone messages, e-mails, but also bullets sent to him while blood and soil was added in the letters and messages like his “family would be buried.”

Nikos Kotzias said that he was target of defamation for his Macedonia policy and listed as lies that a. he received 50 million euros by George Soros, b. that he stole 80 million euros from ‘confidential sums’ of the foreign ministry c. he assigned in an illegal way a visa provider.

The defamation campaign was aiming to silence him due to his Macedonia policy, Kotzias said among others in his lawsuit.

According to the lawsuit filed at Greece’s Supreme Court Arios Pagos, Kammenos has allegedly sent “blackmailing, threatening and abusive messages.” One of them was sent on 30. Sept 2018 with the text “I will finish you,” website newsit.gr reports and adds: According to Kotzias, Kammenos used the same language “traitor” and “people’s enemy” as the threatening messages he received by the Prespes opponents.

The question now is that if and when the lawsuit file reaches the Parliament, Kammenos’ parliamentary immunity will be lifted in order to investigate of Kotzias’ denouncement.

Nikos Kotzias resigned from the Foreign Ministry in mid October 2018, after a stormy cabinet meeting where Kammenos had allegedly accused him of having been bribed by Soros.

Panos Kammenos left the government coalition end of January 2019, due to his disagreement with the Prespes Agreement and its ratification.