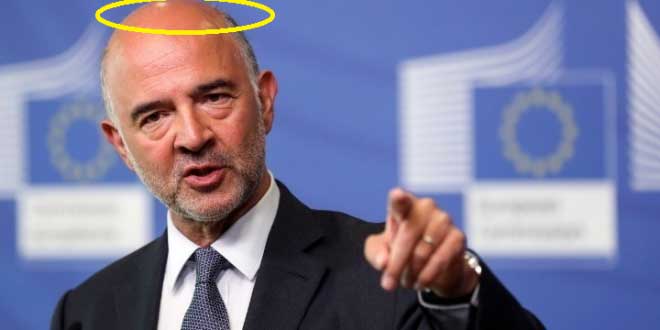 EU Commissioner, Pierre Moscovici, surprised Greeks when when he said that some of the primary surpluses demanded from the country were “too high.”

The Commissioner for EU financial Affairs was addressing members of the Greek Parliament on Thursday when he said that some of the primary surpluses demanded from the country were “too high and unrealistic.”

“Yesterday, a journalist asked me about the surpluses and I replied Pakta non servant -agreements must be respected-,” Moscovici said.

“These surpluses were not proposed by the European Commission but imposed by others and were accepted under a Eurogroup Agreement,” he added.

In his usual Moscovici-I-know-nothing way, he passed the buck to the International Monetary Fund for the imposition and the Greek government for the acceptance.

Saint Pierre may have forgotten or suppressed the role of the European Commission in blackmailing Greece to accept all the IMF directives, including the high primary surpluses.

Millions of Greeks do not.

“I do, of course, respect the agreements because also Greece will be more respected if it respects the agreements,” the Commissioner said.

At the same time, he noted that the primary surpluses “are not realistic, at some point they have to be reduced.” The European Commission knows that a country may not always meet the targets, he added.

I really want to see Moscovici and the commission in general fight for Greece, next time it will try to lower the set surpluses. When New Democracy comes in power, as its leader Kyriakos Mitsotakis has pledged, for example?

Ha! When it comes to take clear position, Moscovici is cautious and refrains from committing himself.

To the question by state news agency amna, whether “there is room for renegotiating the primary surplus targets?” Moscovici replied:

“I wouldn’t advise anybody to try to do so. The Commission is not in the spirit that such surpluses must go on forever, but credibility is  still at the heart of the matter. It is by proving in a long-lasting way that Greece can convince its partners, when the time comes, that you can go to another step. This might be a result, not a precondition. If you try to do that immediately, you will only create doubts with your partners. People must be confident that Greece will respect its commitments not just for the last 6 months but also for the next years . So this is not the brightest idea.”

In this sense, for Moscovici the Alpha and the Omega in the Greek/EU-Lenders relationship is the trust.

The rest is simply “unrealistic surpluses imposed by the IMF and accepted by the Greek government.”

the trust and nothing but the trust/

PS Then these politicians in Europe are still wondering why there is a growing euro-skepticism. Anyone considering that’s because of the double talk maybe?