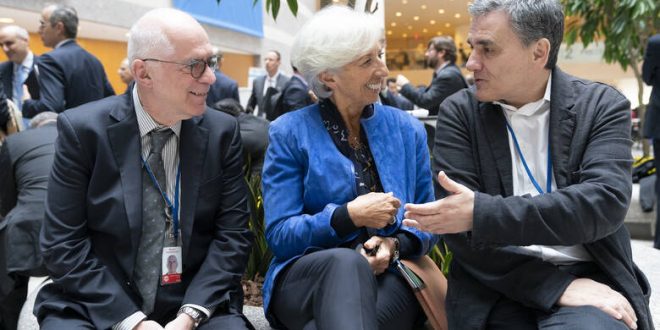 Early repayment of IMF loans was not the only topic between Greek Finance Minister Euclid Tsakalotos and managing director of the international Fund Christine Lagarde on the sidelines of the spring meeting of the Fund and the World Bank. It was the Greek cinema and most likely the film “Adults in the Room” directed by Costas Gavras and based on the the book of ex finance Minister Yanis Varoufakis.

“We have a very good relationship with my friend Euclid,” Lagarde told journalists during a press conference.

She noted noted that the discussion focused on the current issues of the Greek economy and especially on the budget. “I asked him how the Greek economy is going to go about fiscal policies and primary surpluses,” she said.

She added that they also talked about the Greek cinema industry. She has been informed about Gavras’ film where she will also be featured as the film focuses on the tough negotiations between Greece and its creditors in the first half of 2015.

According to information of hellasjournal, Lagarde has already met with Gavras’ wife, and the two  discussed the role of the French managing director in the film. French actress Josiane Pinson will play Christine Lagarde.

On the financial aspect, Tsakalotos informed Lagarde on Greece’s intention to proceed with early repayment of its IMF loans.

According to state news agency amna, Tsakalotos explained that Greece wishes to proceed to the early payoff of part of the IMF loan (approximately 3.8 billion euros with 5.1 pct interest). Greece total debt to the IMF is 9.8 billion euros.

On her part, Lagarde said that she agrees and that the IMF is satisfied by this development.

The Greek finance minister briefed also the head of IMF’s responsible for European Affairs Poul Thomsen on the issue.

Greece plans to submit its early repayment request to European Stability Mechanism first “some time in the near future,” media report on Sunday.

Greece’s biggest gas utility, DEPA Commercial, has clinched a deal with TotalEnergies for the supply …