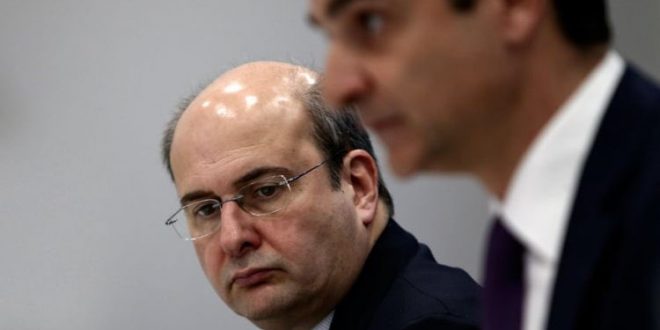 Different courses and education schedule per school unit depending on the village, town, city or region. Slowly but gradually, high-ranking officials of conservative and neo-liberal New Democracy reveal the party plans once it emerges as the winner of the general elections on July 7, 2019.

Slowly but gradually, ND officials reveal a government program that targets the division of the society.

After the racist “child benefits for Greeks only!”, one of ND Vice Presidents supported the idea that school children across the country should not be taught the same school lessons.

“A child in Karpenissi” should be taught other lessons than a child in Maroussi,”Costis Hatzidakis said adding that parents and teachers should choose 10-20 percent of the courses to be taught in the local schools. “Because [local] societies are different and different is also the local economy,” he added.

For those not knowing the Greek realities, please, note that Karpenissi is a 13,000-inhabitant town in the south part of the wild Pindos mountains, while Maroussi is one of the noble suburbs in North Athens.

I don’t know what exactly New Democracy has in mind regarding the so-called “multi-speed schools” but Hatzidakis claimed that this practice is all across Europe.

Trying to understand the concept, I dare say that students in Karpenissi can be taught skiing in school due to the revenue-bringing ski resort in the area, while Marousi students can be taught business administration because they have better chances in this field? Students on the island of Corfu can be taught musical instruments, on Kefalonia singing and on Crete tourism skills (although due to the heavy traffic accidents rate on Crete, they should rather be taught proper driving behavior.)

This class-conscious conception will can only lead to the fragmentation of unified public education system. It was just last month, when ND leader Kyriakos Mitsotakis expressed the same elitistic approach saying that “a child from Peristeri,” a low-middle- and workers-class suburb of West Athens, “who is 20 years old and wants to go to a technical school. And he wants to have a good professional training and find a job tomorrow as a steamfitter or as somebody who repairs elevators…”

Under the pretext of improving educational work, Hatzidakis also proposed that parents should evaluate teachers’ performance and the results should be published on a special platform of the Education Ministry. Teachers’ evaluation will be submitted anonymous by the parents.

In the same context, the assessment of school units by parents through a special platform of the Ministry of Education creates strong reactions within teachers. On the pretext of improving the educational work, evaluation will be made anonymous by the parents but the results will be publicized in the form of … ranking, creating effective first and second-tier schools with the sole “parental judgment” criterion and without including actual needs or deficiencies of Education.

At the same time, he announced the creation of a model school in every prefecture and every large administrative unit in Athens and Thessaloniki for the “talented children of the middle-class and the poor families”.

Ultimately he reiterated ND’s plan for private universities in Greece.

“We are the only country on the planet that has no private universities,” he said, adding that within the framework of the Greek Constitution, New Democracy will create foreign-language undergraduate and postgraduate programs, introduce summer universities and promote the possibility of collaboration between Greek, American and European universities so that they issue joint diplomas.

PS With this and that I have the feeling that rich kids will have a better education paid by parents who will keep teachers as hostages and poor kids can be glad to get a training for a career as steamfitter, shepherd or farmer in order to sever the rich. ND’s neo-liberalism is even worse than the one of the IMF.