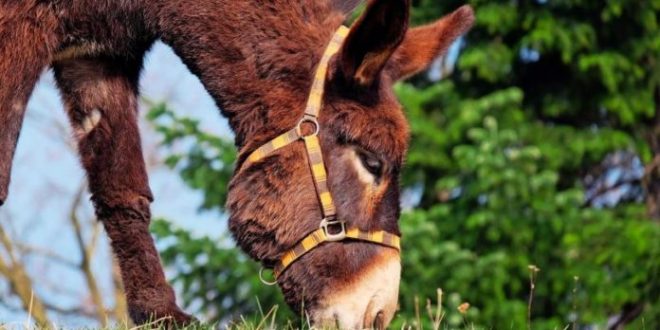 A court in Volos sentenced a man to 12 months imprisonment on suspension and a fine of 5,000 euro for having abused his donkey. The man was spotted kicking the animal that had fallen from the back of his truck. “The donkey was suffering from the evil eye,” the defendant claimed before the court.

It was a group of athletes from the Panthessalic Stadium that saw the brutal abuse and called the police. He was immediately arrested.

The brutal incident took place  on a side road of  the Volos Regional highway.

The man was transporting two donkeys and a pony on his pick up vehicle. At some point, one of the donkeys fell from the truck carriage on the road.

The owner stopped the vehicle, approached the donkey and started to kick the animal repeatedly on the head. He later tied the injured animal on his truck and drag it.

Police arrested the man immediately, a lawsuit was filed against the 55-year-old man for animal abuse.

He first sat in the court room last Monday where he claimed that animals should be beaten in the head if they pass out “so as we slap somebody who has fainted.” He asked for his trial postponement in order to provide the necessary documents to prove his claim.

Before the court the abuser claimed that the animal was suffering from the “evil eye,” it had got a panic attack and it would have died hadn’t repeatedly kick it on the head.

He asked for his trial postponement in order to provide the necessary documents to prove his claim.

When he appeared again in court on Friday, he had no documents by any veterinarian to scientifically confirm his claim. He insisted though that animals in such condition “have to be scared through beating otherwise they die.”

The court did not accept his superstitious claim and sentenced him to 12 months on suspension and 5,000 euros fine.

So, even if he escapes imprisonment, the fines he has to pay are equally painful.