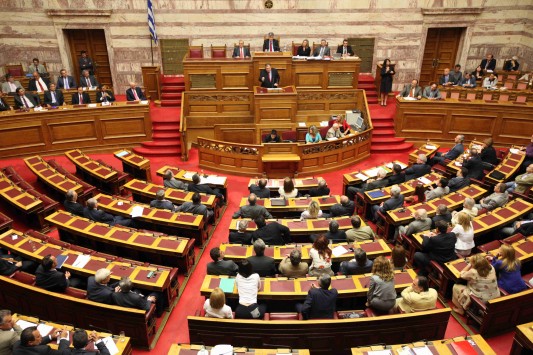 Τhe debate on the bill about the abolition of the university asylum and changes in the regional administration continues ended in a sharp confrontation not only between the Prime Minister Kyriakos Mitsotakis and main opposition leader Alexis Tsipras but also with the rest of opposition parties. And at the end of the debate, New Democracy was left alone when Labor Minister tried to pass two bills irrelevant bills and SYRIZa, KKE and MeRA25 left the Plenary.

Prime Minister Kyriakos Mitsotakis said that his government wants the universities to become reflection cells and places of creation without fear.

“We do not want police officers in the universities but to kick out the hooded individuals. Those who wear uniforms and the Greek emblem are organs of the democracy and give account to it” he said addressing main opposition SYRIZA deputies underlining that those who wear hoods are serving dark interests.

He said that the bill on the asylum protects the education, the research, the culture and the citizens.

“Abolition of the university asylum means ban on delinquent behavior inside the universities” Mitsotakis stressed and he accused SYRIZA of showing “tolerance to delinquency”.

On his part, Alexis Tsipras accused New Democracy of “ideological obsession” on the university asylum.

“Your ideological obsession concerns the Greek public university and whatever this socially, politically and culturally symbolises for our country” he said.

Tsipras said that ND’s obsession starts from its inherent aversion to the public and its bias in favour of the private universities and of course its obsession to anything symbolizes, at political and ideological level, the public universities in Greece.

At the end of the Plenary, New Democracy and far-right Greek Solution voted in favor to abolish the university asylum.

SYRIZA and MeRA25 were absent.

Under the 1982 law, which has been repealed and reinstated by different governments in recent years, Greek universities have been largely out of bounds to police. The so-called Diamantopoulou Law to abolish the asylum was legislated in 2011 but never implemented.

The new law will allow police to enter the university premises even without the previous permission by the dean and the broad members.

Police can enter universities even by a simple phone call by a citizen, a student or a member of the academic community.

I heard on TV earlier, that police can also enter universities if it chases a criminal who seeks shelter inside the university.

PS At the end of the day it turns that Greece continues the same old practice: one government passes a law that it does not implement – i.e. anti-smoking law – then the next government passes the same law that is not implemented…. the vicious cycle of voting laws… Just like infrastructure works that get ready but then they need to be modified in the course of the years for whatever reasons they find – i.e. like the Poseidonos Avenue along the Athens Riviera or the Tram that will most likely never reach Syntagma in downtown Athens again.

The vicious cycle of the dog chasing his tail without purpose other than waste of energy and resources. *sigh*