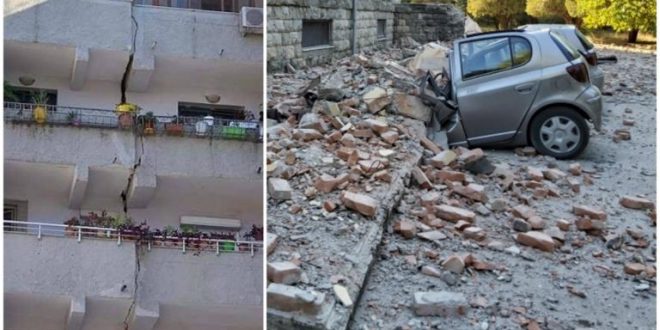 A double earthquake stroke Albania on Saturday afternoon, caused panic among the locals and was felt also in North and West Greece. The first earthquake occurred at 5.30 in the afternoon. The tremor had a magnitude of 5.6 R and a focal depth of 10 km. Its epicenter was in Durres west from the capital Tirana.

The second tremor occurred 11 minutes later, with 5.3 R. The second tremor was weaker than the first but increased the panic among the locals. Two more tremors with the strongest 4.4 R occured until 8 o’ clock in the evening.

According to latest information, at least 64 people were injured the majority of them after they were hit by falling objects or they suffered panic attacks.

It is not clear whether there are fatalities.

Until late in the evening residents of Tirana and surrounding areas remained in the streets fearing more tremors.

The two tremors caused immense material damage with local media reporting that 10 buildings were collapsed in a village near Tirana. In Tirana and Durres many buildings were cracked.

#Earthquake damage to our apartment in #Tirana, #Albania. Everybody is safe. pic.twitter.com/kpFBvRPrvV

The quake was felt at a radius of at least 250 kilometers and was “the strongest of the last 20-30 years in Albania”, according to the defense ministry.

Both earthquakes were felt also in North-West Greece like in Ioannina and Corfu but also in West Macedonia. According to local media, the city of Ioannina was rattled for a few seconds triggering concern among the locals.

Greek seismologists said that they are closely monitoring the phenomenon. They said that the earthquakes in Albania do not affect the Greek territory.

The Greek Foreign Ministry expressed its solidarity and support to the Albanian people via Twitter.

An earthquake with magnitude measuring 3.9 on the Richter scale occurred in the north-east of …