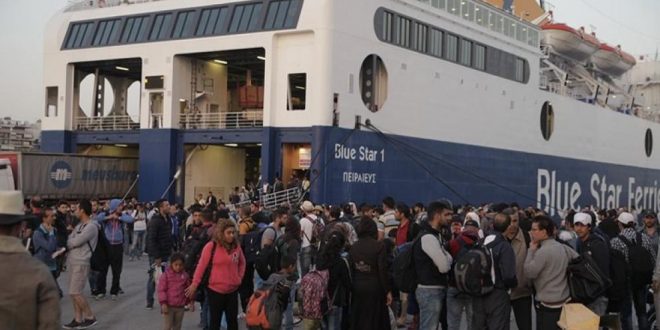 Human Rights Watch (HRW) has urged Greece to remove specific articles on its new Asylum draft Law as they threaten to restrict access to protection for asylum seekers from Syria, Iraq and Afghanistan.

The Greek parliament should scrap provisions in a new bill that threaten to limit asylum seekers’ access to protection, the HRW said in a statement on Tuesday.

The draft law, to be debated in parliament this week, would reduce safeguards for asylum seekers from countries like Afghanistan, Syria, and Iraq in an effort to block the arrival of migrants and refugees in Greece, per a 2016 European Union (EU) migration deal with Turkey.

“The bill is a naked attempt to block access to protection and increase deportations in the face of the recent increase in arrivals,” said Eva Cossé, Greece researcher at Human Rights Watch. “The Greek government should instead prioritize resolving the humanitarian crisis that the deeply flawed deal with Turkey has caused for asylum seekers, and ensure a fair and efficient asylum procedure.”

The bill would make it easier to detain asylum seekers for longer periods. It would scrap important protections for vulnerable people, including unaccompanied children, and it would introduce numerous procedural changes that impede access to a fair asylum process and compromise the right of appeal.

The bill also introduces stricter rules for receiving asylum seekers, delays access to the right to work, narrows the definition of family, and imposes more burdens on torture victims in being recognized as such.

The complex 237-page bill on “international protection and other provisions” was introduced on October 21, 2019 after a rushed six-day public consultation period.

On October 24, the United Nations refugee agency, UNHCR, said the draft law “will endanger people who need international protection,” noting the risk that people could be returned to a country where their life or freedom would be threatened. The Greek National Commission for Human Rights and numerous nongovernmental organizations (NGOs) have expressed concerns about the proposals and the accelerated way they were submitted.

The European Commission, which financially supports migration management in Greece, should openly press the Greek government to ensure that any changes in the law will include safeguards required by EU standards. The commission should promote a meaningful responsibility-sharing system among EU member states to ensure fair and efficient asylum procedures.

The bill comes at a time of increased arrivals to the Greek islands. Since the beginning of 2019, 53,462 asylum seekers have reached islands in the Aegean Sea from Turkey, compared to 42,010 during the same period in 2018. The situation on the Greek islands, where 34,400 women, men, and children are trapped in abysmal conditions, has reached a crisis point. Under a containment policy in place since the March 2016 EU-Turkey agreement, Greek authorities confine asylum seekers on the Aegean islands until their asylum claims are adjudicated, which can take months or even years.

Facilities are severely overcrowded, with significant shortages of basic shelter and unsanitary, unhygienic conditions. At-risk groups such as people with disabilities are often unable to access basic services, such as water, sanitation, and hygiene facilities. Long lines for poor quality food, mismanagement, and lack of information contribute to a chaotic and volatile atmosphere.

“The response to the situation on the Greek Islands should be to ensure a properly equipped asylum system with meaningful responsibility-sharing,” Cossé said. “Greece should abandon the concept that limiting protection for those who escaped conflict and persecution is the way to deal with this situation.”

The bill increases the maximum duration of detention of asylum seekers from three months to 18 months. It allows for detaining people who were not detained when they initially applied for asylum. And it scraps the automatic review of administrative detention decisions by a judge, affecting the right of asylum seekers to an effective remedy.

Under international standards, asylum seekers should not, as a rule, be detained. Although EU law allows for immigration-related detention of up to 18 months, it also allows member states to adopt more favorable provisions. EU law also stresses that a person should not be detained solely because they are seeking international protection, and requires states to provide judicial review of the lawfulness of detention.

In addition, the bill perpetuates the detention of unaccompanied children under the so-called “protective custody” regime, even though the European Court of Human Rights (ECtHR) has repeatedly determined that such detention violates children’s rights. Children should never be detained for migration purposes. Detention can cause serious, long-term harm to children’s development, including anxiety, depression, post-traumatic stress, and memory loss.

Human Rights Watch has documented that children detained in Greece are forced to live in unsanitary conditions, often alongside adults they do not know, and that the police have been abusive at times and ill-treated them.

The bill introduces numerous changes to the asylum procedure that would make it harder to receive a fair evaluation and to appeal negative decisions. These include: