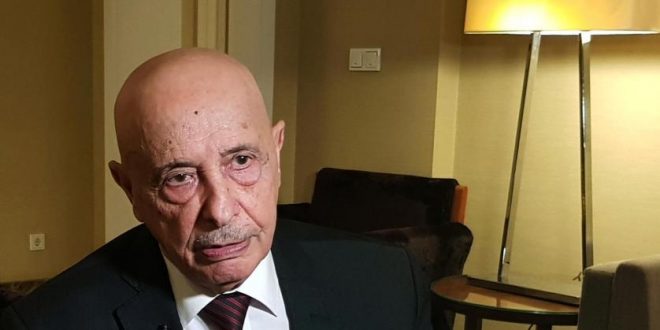 Libya’s elected parliament president on Thursday vowed to invalidate a disputed maritime deal with Turkey signed with the rival UN-recognized government in Tripoli. Aguila Saleh was invited to visit Athens immediately after Greece learned of the Turkey-Libya agreement.

“We are here to stress that the deal is invalid. Those who signed it lack legality,” Aguila Saleh Issa, who was invited for talks in Athens, said through a translator, AFP reported.

An ally of Libyan strongman Khalifa Haftar, Saleh said he would be in “close contact” with Greek officials to “neutralize” the agreement signed last month between Turkey and the Tripoli-based Government of National Accord (GNA).

“We will resist anyone attempting to interfere in Libyan internal affairs,” he said.

Athens has accused Ankara of “blackmailing” the embattled government in Tripoli into approving the military and maritime deal, which divides much of the Eastern Mediterranean between Turkey and Libya.

Athens has expelled the Libyan ambassador and urged the UN to condemn it.

On Wednesday, the UN urged Greece and Turkey to maintain dialogue and there were no signs of a Security Council meeting on the issue.

Analysts say the agreement is a response to Turkey being frozen out of the Mediterranean energy race by regional rivals.

Ankara has been one of the staunchest supporters of the beleaguered Government of National Accord (GNA) in Tripoli, a relationship that has deepened in the face of an assault by Haftar to seize the Libyan capital since April.

Turkish President Recep Tayyip Erdogan said this week that he was ready to send troops if they were requested by Tripoli.

The maritime deal is particularly important given the recent discovery of vast gas reserves that has triggered an exploration scramble between adjacent states and international oil companies. [AFP]