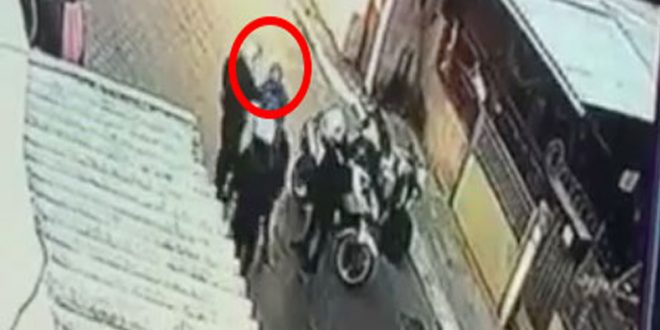 Four policemen have suspended from duty after a video caught one of them slapping an 11-year-old boy in Menidi suburb of western Athens. The incident became known after the father brought the beaten and terrified to a hospital and a medical worker posted the case on social media.

According to reports, the four policemen of the motorcycled units DIAS were patrolling in  the area when they saw the “11-year-old suspects.” They stopped the boys asking them where they were going. One of the children told them they were going to the father’s workshop nearby.

Apparently the answers were not satisfied and the children remained “suspects.”

While the boy in blue is explaining to policemen what they are at to and even pointing with his hand to the location of the father’s shop, the policeman suddenly his hand and slaps him, with his colleagues watching without any intervention.

The other child is scared and starts to run to escape police violence.

The incident took place at 4 o’ clock Saturday afternoon, it was captured by a security camera.

The policemen get on their motorcycles and go when a car enters the narrow street,

The hospital employee wrote among others that “the boy was terrified, in a very bad psychological situation  and had obviously the sign of the violence he experienced.”

In a statement issued on Sunday, the Greek Police said that it has launched an internal investigation about the incident and that all four policemen were suspended.

The police leadership of Attica is trying to contact the boy’s family. the Police would offer a psychologist’s assistance to the child if the family would want to, the statement concluded.

Minister for Citizen Protection, Michalis Chrysochoidis, expressed his displeasure about the incident with a post on Twitter.

Worth noting that the two boys are members of the Roma community.