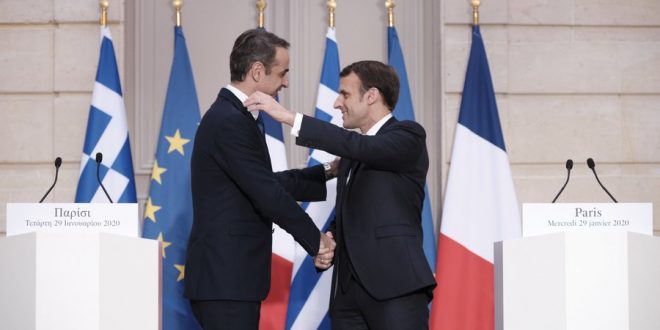 “France supports Greece and Cyprus in terms of respect for their sovereign rights, condemning Turkey’s challenge of these,” President Emmannuel Macron said during a joint press conference with Greek Prime Minister Kyriakos Mitsotakis at Elysee Palace in Paris on Wednesday.

“We repeated our concerns and condemned unequivocally the Turkey-Libya agreement,” he said.

The French president expressed support on the migration issue and said France will help in the return of irregular migrants to their countries.

France and Greece share the same vision, the Macron underlined.

Macron spoke of the Greek-French joint operations at sea and land. “We would like to see other countries with shared borders become involved,” he noted.

“The only way to resolve differences in the East Mediterranean is through the International Law,” PM Mitsotakis said on his part.

“We jointly condemned Turkey’s provocative actions,” Mitsotakis added and reiterated the Greek position that the Turkey-Libya maritime borders agreement should be cancelled.

“Greece and France are promoting a new strategic defense framework, and at bilateral level our collaboration will be intensified.”