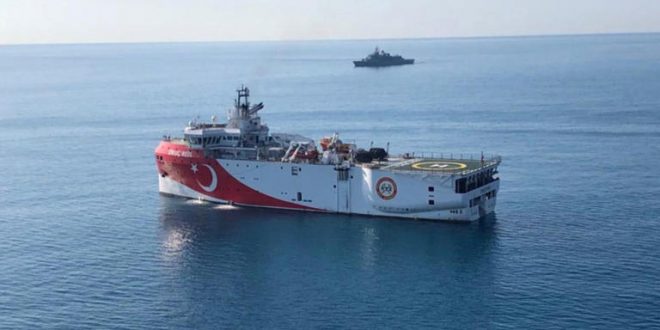 Turkish seismic research vessel Oruc Reis has been spotted within the boundaries of the Greek continental shelf on Friday morning. The Greek Armed Forces have deployed the frigate Nikiforos Fokas to the area to closely monitor the vessel’s activity.

The vessel is not escorted by any Turkish military vessel with the closest to have been located 50 nautical miles away, in the East.

Before entering the Greek territorial waters,the Oruc Reis was operating in the blocks 4 and 5 of the Exclusive Economic Zone of Cyprus.

Citing sources from the Greek General staff, media note “it is believed that the vessel may have been forced to change its course due to bad weather conditions.” Strong North-West winds are currently blowing in the area with intensity of 6-7 Beaufort, Greek state broadcaster ERT TV reported.

Turkey had issued a NAVTEX for the maritime area South off Crete.

It should be recalled that 24 years ago, the two countries came at the brink of an armed conflict after Turkey sent commandos at the islets of Imia, in the eastern Aegean Sea. On January 31, 1996 three officers of the Greek Navy lost their lives when the helicopter they were on board to monitor the situation crashed in the Aegean.

Despite Greek, Cypriot and international reactions, Turkey has been continuously sending research vessels in the East Mediterranean Sea claiming its rights for hydrocarbon research and drilling.

Greek analysts wonder whether the entrance of Oruc Reis in the Greek continental shelf is “another strong provocation by Turkey.”

According to latest information, the Oruc Reis was still in the same area late Friday afternoon.