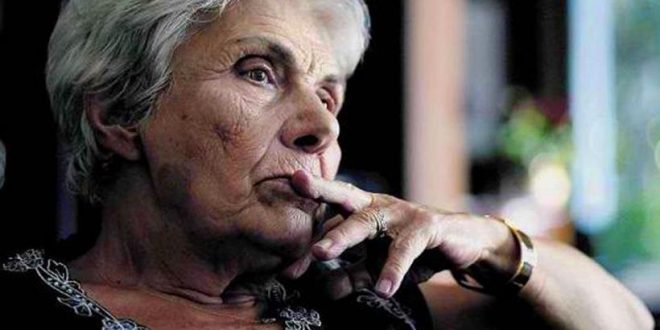 Great Greek poet, Kiki Dimoula, passed away on Saturday afternoon, following days in intensive care unit of a private hospital in Athens. According to a statement issued by the hospital she died of a heart failure following suffering from chronic obstructive pulmonary disease (COPD).

In one of her speeches about poetry, Dimoula had said:

In a speech on poetry Dimula defined the poem as follows:

“You are walking in a desert. You hear a bird singing. As unlikely as a bird is in the desert, you have to make a tree for him. That’s the poem.”

She is the first living female poet ever to be included in the prestigious French publisher Gallimard’s poetry series.

Dimoula’s work is haunted by the existential dissolution of the post-war era.

Her central themes are hopelessness, insecurity, absence and oblivion.

Using diverse subjects (from a “Marlboro boy” to mobile phones) and twisting grammar in unconventional ways, she accentuates the power of the words through astonishment and surprise, but always manages to retain a sense of hope.

Her poetry has been translated into English, French, German, Swedish, Danish, Spanish, Italian and many other languages.

In 2014, the eleventh issue of Tinpahar published ‘Kiki Dimoula in Translation’, which featured three English translations of her better known works.

She was awarded the European Prize for Literature for 2009.

She was a member of the Academy of Athens since 2002.

Dimoula worked as a clerk for the Bank of Greece. She was married to the poet Athos Dimoulas (1921–1985), with whom she had two children.