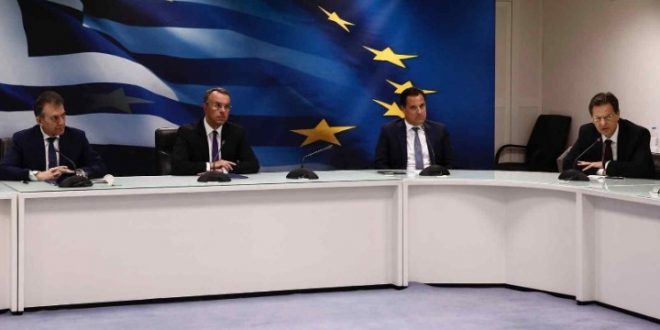 A financial aid of 800 euros for employees, suspension of tax and social security contributions and VAT decreases for goods related to coronavirus protection are among the economic measures announced by the Greek government on Wednesday.

The package of financial measures to fight recession caused by the pandemic is worth 3.8 billion euros.

Measures, among others, are:

Compensation of 800 euros to all workers whose labor contract was suspended because of the suspension of operations of their enterprise, will be paid in early April, Finance Minister Christos Staikouras said on Wednesday during a joint press conference with the ministers of Labor and Development.

The compensation will be paid in early April, it covers around 500,000 workers at a cost of around 400 million euros.

He noted that the Greek state will fully cover all social insurance, pension and health rights of workers and their social insurance contributions based on their nominal wages.

The fiscal cost for these 500,000 workers in the period March-April will be around 450 million euros.

He also announced that for these workers, all tax payments will be suspended for a period of four months.

Development and Investment Minister Adonis Georgiadis on Wednesday announced a package of six financial instruments as part of the second set of financial measures to tackle the effects of the spread of coronavirus.

The minister emphasized that all measures are related to preserving jobs.

Before announcing the measures, he stressed that the market was normalised and added: “We will all come out of this crisis and no one will be left behind, we are all judged, government, business, working citizens.”

The measures announced are the following:

1. An amount of 800 euros will be granted at the beginning of April to the self-employed for the period March 15-April 30.

2. An interest rate subsidy for up-to-date business loans for 3 months for the sectors of the economy that are directly affected by the coronavirus. Should the crisis continue, the measure may be extended further. In consultation with the banks that have already announced it, the payment of such debts is postponed until 30/9/2020.

3. In consultation with the European Commission, for the start-up period of the economy, a guarantee mechanism for lending to small and medium-sized enterprises, up to 3 billion euros, will be launched.

4. The European Investment Bank will provide banks with liquidity for new business loans of 2 billion euros.

5. In cooperation with the European Investment Bank Group, a guarantee mechanism for loans of up to 500 million euros shall be established.

6. The Entrepreneurial Fund of the Hellenic Development Bank is simplified and its resources are increased by 250 million euros to provide new loans to corporations affected by the coronavirus, with a 100 percent interest rate subsidy for two years.

Business tax and levy suspensions: The measures apply to all, but strictly, to those in the sectors that are most affected by the the epidemic. The measures are horizontal, as they apply to all businesses with specific Activity Code Numbers (EACs), whether they are open as whole or part of their business, either closed by government order or closed on their own initiative. They do not concern the whole of the Greek economy.

All ministers underlined that the measures are linked to “preservation of jobs” and that no business will benefit form them if it proceeds with lay-offs.

PS For KTG is not clear whether the suspended payments will also be written off or will have to be paid retrospective when the pandemic disappears or then be paid in installments.

The allowance for workers refers to those not working “black.”

No clarification about seasonal workers in the tourism sector.