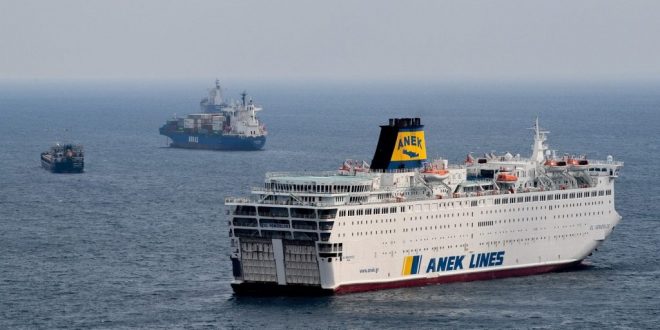 120 seamen, passengers on ferry “Eleftherios Venizelos”, have been tested positive to coronavirus. The infection cases add to another 40 tested positive on the two previous days. The ferry with 383 passengers and crew on board and chartered by a Turkish company remains anchored off the port of Piraeus since March 21.

Two of the first 20 tested seamen, a 72-year-old Swiss national and a 32-year-old Indonesian man, are hospitalized in Attikon designated hospital in Athens as they had the more serious symptoms.

The Greek ferry has been leased by a Maltese company with a Turkish owner and left the port of Cesme, in western Turkey, on March 7, head of Civil Protection Nikos Hardalias said on April 1.

With 34 people crew, the ferry was transporting 349 seamen of various nationalities to a vessel waiting in Spain. Spanish authorities refused to grant docking permission.

Among the seamen are 150 from Turkey, 83 from Indonesia, 82 from Ukraine, several from Bulgaria, Kazakhstan etc and two Greeks.

The shipping company Miray Shipping Management reportedly ordered the ferry to bring the seamen back to Turkey. However, Turkish authorities would allow only Turkish nationals to disembark. Since then, Eleftherios Venizelos remains anchored off the port of Piraeus, as Greece does not allow foreign ships to dock at the country’s ports.

While repatriations procedures were reportedly underway on March 29, result of the test on the Swiss national turned positive.

All the passengers and the crew have been tested, the results of some tests are still pending, media report on Thursday..

The high number of infected people on the ship have set Greek health authorities on alert, they are reportedly planning to move those tested negative into a hotel and place them in 14-day isolation.

ERT TV reported that those infected are either isolated on the ferry deck or in separate cabins.

During the daily briefing on coronavirus, the Greek Civil Protection announced that the ferry will be allowed at to dock at the port of Piraeus after clearance by the National Health Organization. The ferry will be anchored at a special dock with a isolation box installed outside.

head of Civil protection Nikos Hardalias said that of 380 tested passengers and crew, 119 were positive, 259 negative and needed to undergo a second test.

Those tested negative will be gradually moved to hotels and then repatriated to their countries.

Those tested positive will remain on Eleftherios Venizelos.

He added that the shipping company will informed the families of the passengers and the crew on Friday.

Media report that the ferry is expected to dock Thursday evening.