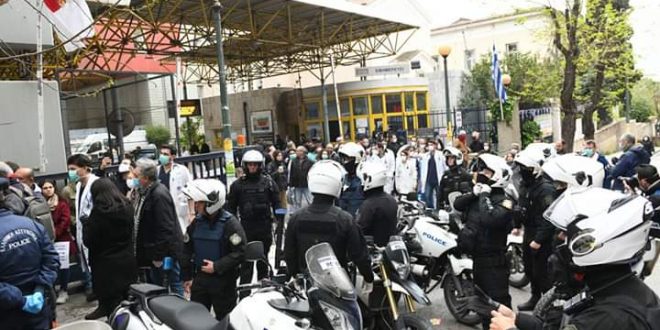 Police squads in anti-riot gear were sent to Evaggelismos hospital in Athens to disperse a gathering of doctors and nurses on the International World Health Day. The health workers struggling against the coronavirus in the biggest hospital in Greece, were demanding better protection against the virus and the hiring of more personnel. 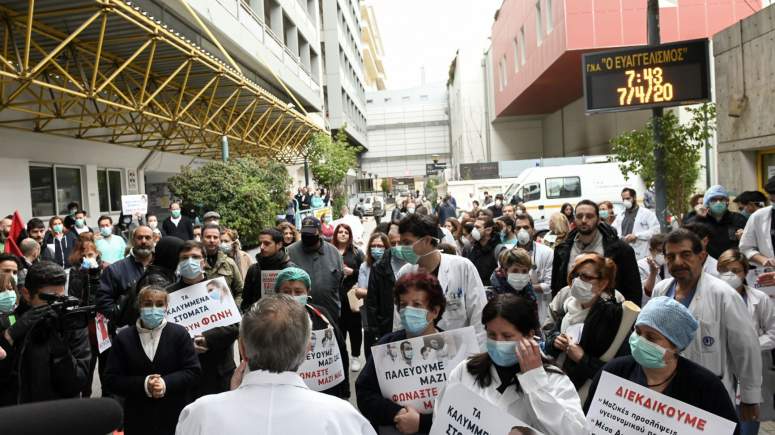 Protesters booed the police, shouted “Out!” and chanted “terrorism will not pass through.”

Some tried to ease the tension, and ultimately police was withdrawn following orders from above. 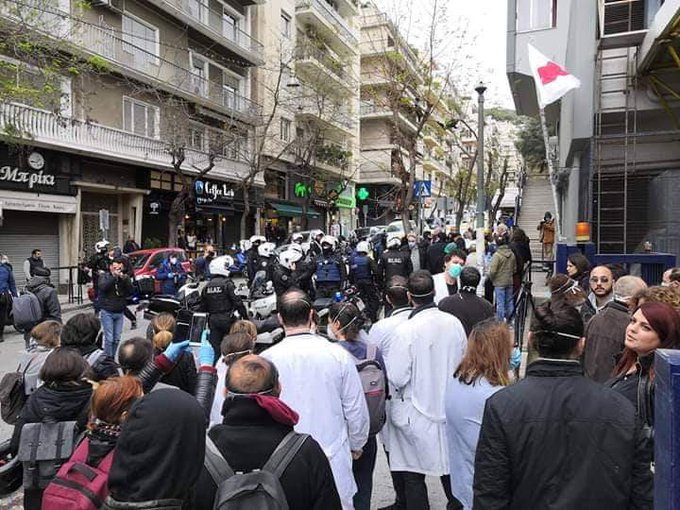 The Secretary General of OENGE, Panos Papanikolaou told media at the entrance of Nikaia General Hospital urged Minister of Citizen Protection Michalis Chrysochoidis to apologize immediately for the unacceptable intervention of police.

Alexis Tsipras posted on Facebook a video from Evaggelismos and criticized the government noting “yesterday those in white and green blouses were heroes, today they have no right to raise their voice.”

The protest organized by the Association of Greek Hospital Doctors (OEGNE) was across the country.

Hospital workers once again point out the major shortages of protection, such as masks, and call for immediate staff recruitment both during and after the pandemic. They are also asking for more tests for the coronary artery so that we know the actual number of cases in our country.

“Next to the patients, at the forefront of this battle are the most experienced workers, with many years of work, some with underlying health issues. Individual protection means and new recruitment are necessary,” said the general advisor of hospital workers union POEDIN Anastasia Politou.

Outside the hospital Gennimatas also in Athens, police conducted control checks and hardly allowed anyone to cross inside, reports efsyn. 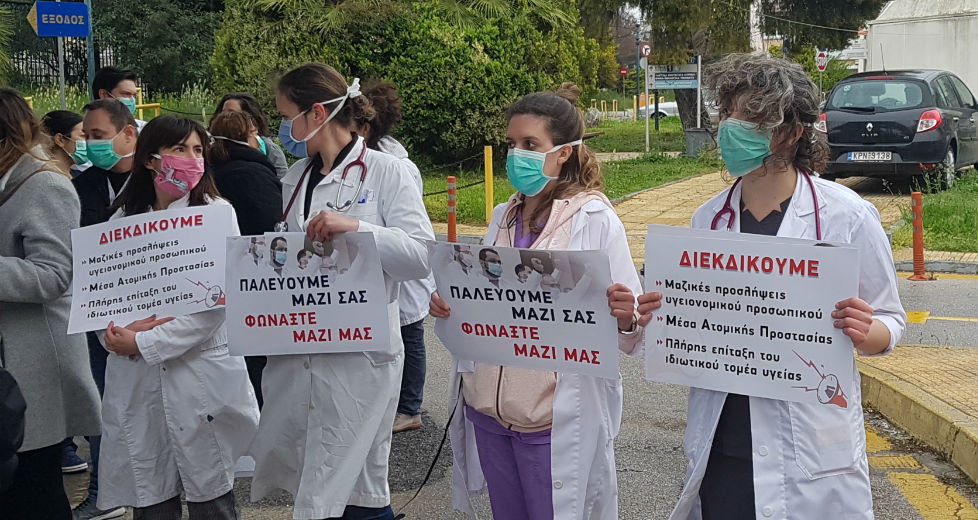 Protesters opposed the police intervention chanting “No mockery! Give money for Health!” and “Free health for all, for every uninsured and migrant!”

Workers at Attikon, one of the designated hospitals in Athens, denounced on Monday, attempts by the general manager to to silence them. 80% of the operation of the hospital clinics and daily services has been suspended. “Colleagues with underlying health issues like diabetes or asthma are not allowed to take a leave despite the medical advises,” the workers reportedly denounced.

They complained that “some 30 additional staff of various specialty fields have been hired with temporary contracts and that the hospital has “borrowed 8 respirators from the hospital of Veria.”

Hospital workers posted on social media, letters their unions have received, instructing them to not speak to the media, unless previously approved by the management.

Symbolic rallies were held also in the courtyards and entrance gates of hospitals in Thessaloniki, Patras and othe rGreek cities.

More than 14 million masks and other equipment for the country’s public health system have arrived from China since last week. The materials were donated by several private businesses and institutions. However, health workers often posted pictures of the masks being expired.

PS What was the purpose of sending police to the hospitals? To fine them for not keeping safety distance outside, when they work shoulder to shoulder inside? Or even arrest them? What is interesting in the government and govt-supporting media is that they extensively show the situation in hospitals all over the world, but there is absolute silence and no reports on our Greek hospitals.

“We are perfectly shielded,” is the narrative of the government. Amen.