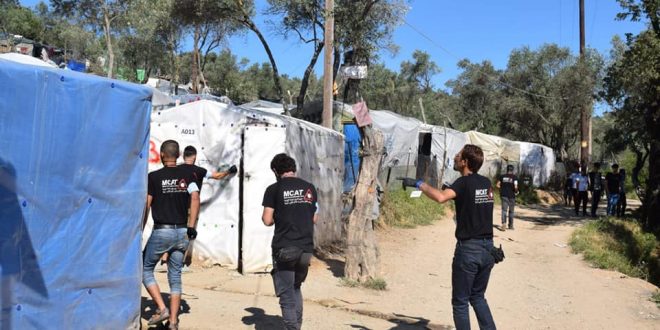 The Regional Authority of the North Aegean filed an a law suit against the volunteers group Moria Corona Awareness Team for speaking about the “Greek side of the island” of Lesvos.

The Regional Authority said that the specific phrase implies that the territory where the Moria hot spot is located does not constitute Greek territory.

“Because challenging our undisputed national sovereignty is a criminal offense, we file a relevant law suit at the Prosecutor’s Office,” the regional authority said according to state broadcaster ERA RM.

The Moria Corona Awareness Team is a group made of refugees and migrants living in the accommodation and identification center of Moria. Aim of the group is reportedly to inform asylum seekers about measures against the coronavirus pandemic.

Speaking to radio station Status 107.7 FM in Thessaloniki, spokesman of the group said that the aim was not to shows that the area of the camp is non-Greek territory but to emphasize that life inside and outside the camp were two completely different things, two different worlds.

While Greeks have access to all goods and rights, those living in Moria lack even basic necessities such as water and security, spokesman Mohammed Ali Zantah reportedly said..

Regarding the post, he clarified that it is not certain that they will take it down, most likely they will modify it or explain what they meant.

The spokesman, an asylum seeker from Afghanistan, clarified that in no case did the team imply the “separation” of the island.

Following a Greek outcry, the Team said on its Facebook page that the whole think is a “misunderstanding.”

The Team is receiving some aid by Greek NGO Stand By Me that provides fire protection workshops.