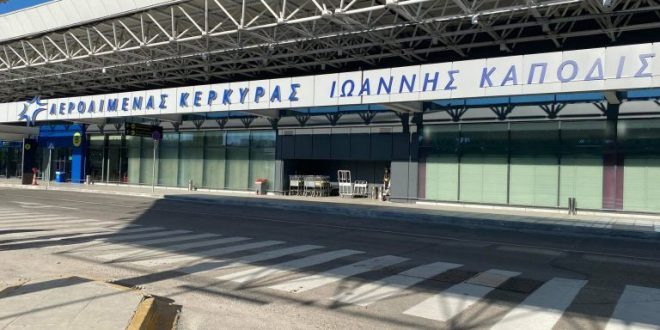 An aircraft flying the route Istanbul-Manchester made an emergency landing at the airport of the island of Corfu on Wednesday evening after a passenger ran amok.

Due to an “emergency” situation, the aircraft was exceptionally allowed to land at the airport I. Kapodistrias as Greek airports are closed to flights from Turkey due to coronavirus.

According to state broadcaster ERT TV, a h passenger ran amok and started knocking on the cockpit door. The crew activated an “emergency” situation signal.

contrary to intitial reports the passenger was not Turkish but British. He was drunk, media reported later.

Due to the “emergency” the JET-2 aircraft was allowed and made the emergency landing on the island of Corfu short after 8 o’ clock in the evening.

ERT reported that other passengers intervened and managed to bring the troublemaker under control.

Greek Police and Civil Protection officials had to consult to determine what procedures will be followed  due to the coronavirus restrictions for flights form Turkey.

220 passengers are reportedly on board of the airplane.

Local media report that after consultation with the National Health Care Organization EODY, only this one passenger was allowed to disembark and he was arrested.

The aircraft was allowed to continue its flight schedule.

The British passenger had to undergo a COVID-19 test. He remains in isolation until the test results are out in 1-2 days, ERT report Thursday morning. He will be taken to prosecutor and most likely be send to UK.