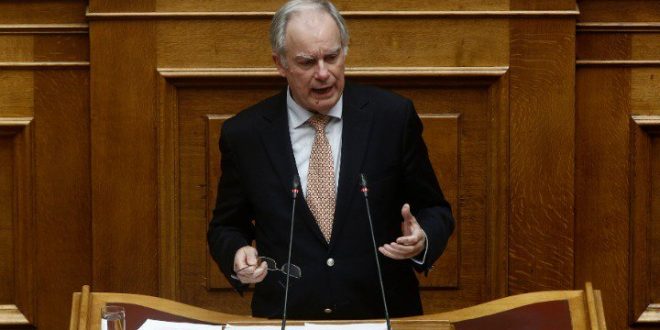 Eleni Zaroulia, the wife of the leader of Greece’s neonazi organization Golden Dawn and former MP, is given a temporary appointment to work in the Greek parliament. The job decision signed by Parliament Speaker Costas Tasoulas (New Democracy) was published in the Official Gazette on Friday.

The recruitment comes just 5 days, before the court issues its verdict on the Golden Dawn trial.
59-year-old Zaroulia is among the 69 defendants and is charged with membership of and/or directing a criminal organization.
According to media, it was her husband, Nikos Michaloliakos, who asked the removal of the previous temporary employee end of September and asked the Parliament Speaker for his wife’s appointment.
The job decision is based on the rules of the Parliament, which allow leaders of parties once represented in parliament to appoint temporary officials.
Citing sources, news website news247 reported that the Parliament speaker  “it is the absolute right of Nikos Michaloliakos.”
The hiring triggered an outrage and even mainstream media that support ruling New Democracy sharply criticized Tasoulas’ approval describing it as a “first class gaffe.”
Main opposition left-wing SYRIZA said in a statement that “Tasoulas’ decision surprises every democratic citizen and raises many questions. The leader of the criminal organization, Nikos Michaloliakos, is aware of this and is desperately trying to please his own people. However, the question remains why the Parliament Speaker proceeded with the hiring now.”
SYRIZA asked whether PM Kyriakos Mitsotakis was approving such a decision.
Communist KKE said that the hiring “provokes the anger of every democrat and above all of the victims of Nazi violence. No rules of the Parliament procedure and no procedure should become the alibi for such unacceptable decisions, which must be revoked here and now, together with the abolition of the disputed article of the rules of the hiring procedure.”
Varoufakis’ MeRA25 described the decision of Tasoulas to accept Zaroulias’ appointment as “unthinkable and outrageous. We demand that this decision be revoked immediately. It is an insult to the whole democratic world, the workers and the youth who demand the condemnation of the neo-Nazis.
According to latest media information, the Prime Minister is considering to intervene, even late on Friday night.
The available options to cancel the recruitment of Eleni Zaroulia are reportedly:
1. The Parliament Speaker revokes the decision
2. By changing the legislation and change the rules of procedure through the conference of party leaders
3. Freezing of the decision.
Of course, the Prime Minister cannot directly intervene and freeze or revoke such a decision. But, politically, he also cannot allow it to prevail. Even if there is a far-right front within New Democracy.
Nevertheless, any intervention by the PM will expose that Parliament Speaker. But who cares?