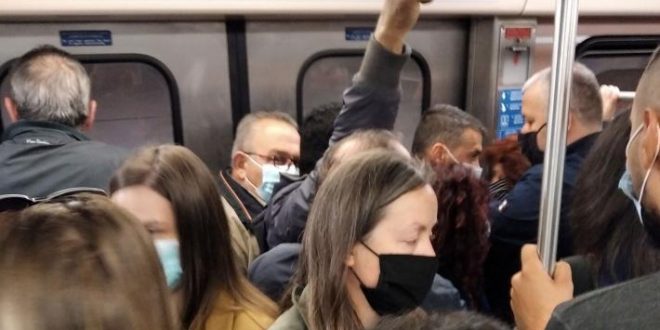 Greek Prime Minister Kyriakos Mitsotakis reiterated claim that the Public Tranport was not a source of Covid-19 transmission. It was a scientific unfounded claim to justify that the government did nothing to fix the problem of overcrowded public transport means especially in Athens and other big cities during the peak hours.

Today, newspaper rizospastis published the report by Public Health Inspectors based on surveys conducted at main metro and urban train ISAP stations in the Greek capital.

Inspectors found out that while all passengers wear masks, phenomena of crowding have been observed both inside wagons and on the platforms.

The schedules were every 4 minutes for the metro and 9 for ISAP.

Inspections were conducted at the Metro/ISAP station of Omonia in downtown Athens on November 6, at 9.45 in the morning.

Although it was not peak time, the inspection revealed conditions of crowding

*At the ISAP platform in both directions crowding conditions prevailed. “Inside the ISAP train, conditions of intense crowding prevailed in every wagon and the seats were almost all occupied.

*The frequency of the schedules at the time of the control, was 4 minutes for METRO and 9 minutes for ISAP.

In their report, the Public Health Inspectors urge that “in order to deal with this negative phenomenon and to observe the measure of distancing, the trains should be more frequent, thus decongesting the area of ​​the platforms and the train wagons.”

This report refutes the government claims that there is no overcrowding in public transport means and that the state of urban transport is not the cause of outbreaks, rizospastis, the newspaper affiliated with the Communist party KKE, notes. On its website, the newspaper has also published the report.

Meanwhile, at least 16 workers at public transport means OSY (bus, trolley bus) and one in STASY (metro, tram, urban train) in Athens have been tested positive to Covid-19, unionists and workers denounced.

PS as the gov’t is still unwilling to spend 1 euro for the urban transport it increased the rate for teleworking in the public and private sector and threatens with heavy penalties companies that do not comply. But food stores that are open, factories and other production units, online services and deliveries (just to mention a few) cannot operate with teleworking. And in the end, citizens have been queuing – and crowding- outside public services because “nobody picks up the phone to arrange an appointment” as they complained in reports broadcast by private TV channels.