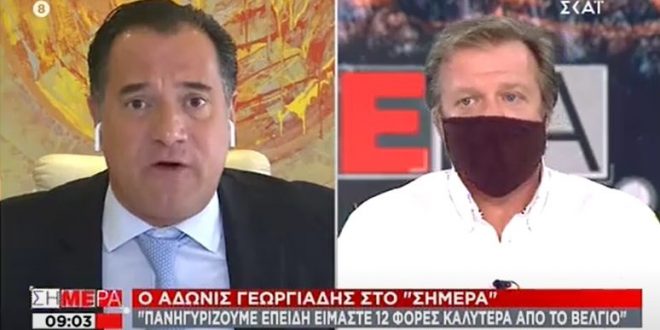 “Yes, we celebrate because we are 12 times better than Belgium,” Development Minister Adonis Georgiadis shouted during a live interview on Skai TV on Monday morning. In an effort to persuade the panel and the public that Greece is doing better than other European countries, he started listing the recent data on deaths per one million. he starts with Belgium, continues with Spain and other countries to end with “Greece and 120 deaths/million.”

A journalist asks: “You celebrate 120 deaths?”

“I don’t know how you celebrate in your life. Yes, I celebrate because we govern a country 12 times better than Belgium,” Georgiadis kept shouting out of control in his usual Adonis-style.

Note that on Saturday and Sunday a total of 211 infected died in Greece, so many as from the outbreak in late February until August.


“The j*** picked up the day to compare the situation with Belgium when we surpassed it in deaths within 24 hours.”


“Adonis celebrates because we have fewer deaths than Belgium. In Belgium they celebrate because they have fewer Adonises than we do.”

Prompt was also the reaction by main opposition party SYRIZA that said in a statement:

“Mr. Georgiadis is celebrating at a time when our country is losing more than 100 people per day, the national health system has collapsed with the sole responsibility of his government, while yesterday our country had the 10th worst deaths performance in the world in proportion to its population. According to ECDC figures, in the last 14 days Greece is 17th worst in the EU in terms of deaths per population, having outstripped 14 countries that were doing worse until mid-October.”