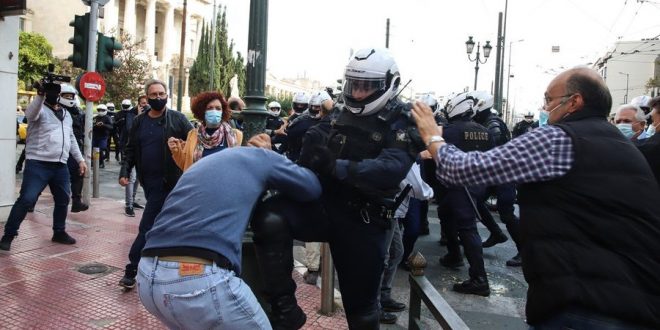 Amnesty International is calling for the end of police violence and officers’ impunity in Greece following the recent excessive use of force or the use of illegal force. In its call the Greek chapter of AI urges people raise their voices and to sign a petition that will be sent to the Ministers of Citizen Protection and Justice.

Just on Sunday, riot police fired a flash grenade inside a closed space, the entrance of an apartment building in Exarchia district of Athens. this is forbidden as it can seriously injure people.

On the occasion of the 12th anniversary of the murder of teenager boy Alexis Grigoropoulos by a police office, law enforcement authorities proceeded to mass detentions practically for no reason. A total of 399 people were taken to police facilities and kept them in closed spaces for hours without proper anti-coronavirus measures. 143 of the detainees were ultimately arrested and charged with violation of lockdown measures. Among them are two prominent human rights lawyers who were exercising their duties.

Again and again there are denouncements on media and/or social media about humiliating behavior of police officers during lockdown controls.

A woman was reportedly was sexually harassed and vulgarly humiliated by police during such a control in Athens on Friday evening. The Greek Police let know that it is investigating the issue.

“Recently, we have witnessed an increase in complaints of excessive use of force and / or the use of illegal force by law enforcement officials in Greece.

Amnesty International has documented many such incidents, including ill-treatment of detainees at arrest and / or detention, as well as excessive use of force, chemical irritants / tear gas and ill-treatment of protesters and restrictions due to coronavirus. These incidents also include the mistreatment of refugees and migrants during repatriation operations, detention or simply walking down the street.

Some of the people Amnesty International spoke to told us that they had been targeted because of their race, disability or sexual orientation. Some suffered humiliating behavior after having their clothes removed and subjected to a physical examination.

These incidents are not “isolated”, as the Greek authorities claim, but rather systematic, and reflect a continuing culture of impunity. Meanwhile, victims of police ill-treatment and / or their families complain of lengthy criminal proceedings and ineffective criminal and disciplinary investigations into their cases.

For years, Amnesty International and other international and Greek organizations have documented and denounced ill-treatment and illegal use of force by law enforcement officials.

Despite the serious concerns raised by civil society, the media and victims seeking justice, successive Greek governments have failed to recognize the scale and persistent nature of human rights abuses committed by law enforcement officials and alleged climate of impunity.

Enough! The vicious circle of abuse must be broken and the time is now. Join us, raise your voice, send a strong message to the Greek authorities demanding action and justice now. This continuing culture of violence and impunity must end forever.

All ill-treatment, including the unlawful use of force, by law enforcement officials will end, and human rights will be at the core of those who perform their duties.

All allegations of human rights violations by law enforcement officials will be investigated promptly and appropriately.

All law enforcement officers in uniform will wear an easily recognizable and clearly visible form of personal / personal identification at all times, and that all other necessary steps will be taken to ensure full accountability of law enforcement members and their administrators for all their actions.

The right to freedom of peaceful assembly of the people in Greece will be fully respected, even during a pandemic, taking into account all health parameters and in accordance with international standards. In this context, we call for the amendment of law 4703/2020 on public gatherings and its alignment with Greece’s obligations under international human rights law.

You can join the appeal here.

More posts about recent police brutality, detentions and arrests for no reason here (scroll down).