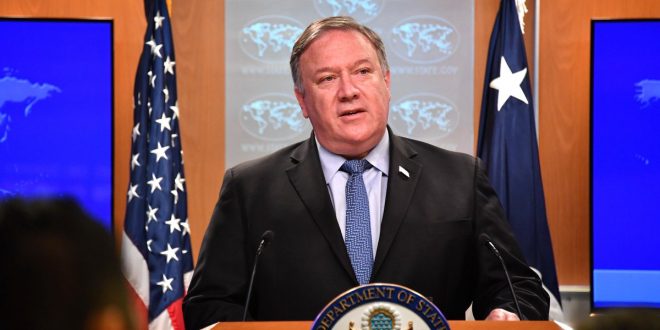 The US State Department announced on Monday that it imposes sanction to Turkey for the purchase and testing of Russian S-400 missiles. The sanctions are imposed under CAATSA 231. US Secretary of State Mike Pompeo said in a tweet that Turkey’s S-400 system risks U.S. military technology and personnel and helps fuel Russia’s defense sector. We urge all countries to avoid significant transactions with Russia’s defense sector.

Despite our warnings, Turkey moved ahead with its purchase and testing of the S-400 system from Russia. Today’s sanctions on Turkey's SSB demonstrates the U.S. will fully implement #CAATSA. We will not tolerate significant transactions with Russia's defense sector.

Today, the United States is imposing sanctions on the Republic of Turkey’s Presidency of Defense Industries (SSB) pursuant to Section 231 of the Countering America’s Adversaries Through Sanctions Act (CAATSA) for knowingly engaging in a significant transaction with Rosoboronexport, Russia’s main arms export entity, by procuring the S-400 surface-to-air missile system.  The sanctions include a ban on all U.S. export licenses and authorizations to SSB and an asset freeze and visa restrictions on Dr. Ismail Demir, SSB’s president, and other SSB officers.

The United States made clear to Turkey at the highest levels and on numerous occasions that its purchase of the S-400 system would endanger the security of U.S. military technology and personnel and provide substantial funds to Russia’s defense sector, as well as Russian access to the Turkish armed forces and defense industry.  Turkey nevertheless decided to move ahead with the procurement and testing of the S-400, despite the availability of alternative, NATO-interoperable systems to meet its defense requirements.  This decision resulted in Turkey’s suspension and pending removal from the global F-35 Joint Strike Fighter partnership.

Today’s action sends a clear signal that the United States will fully implement CAATSA Section 231 and will not tolerate significant transactions with Russia’s defense and intelligence sectors.  I also urge Turkey to resolve the S-400 problem immediately in coordination with the United States.  Turkey is a valued Ally and an important regional security partner for the United States, and we seek to continue our decades-long history of productive defense-sector cooperation by removing the obstacle of Turkey’s S-400 possession as soon as possible.