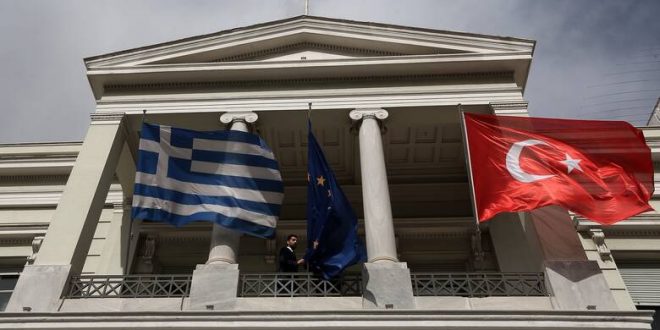 Exploratory talks between Greece and Turkey resumed in Istanbul

January 25, 2021 Greece, Politics Comments Off on Exploratory talks between Greece and Turkey resumed in Istanbul 401 Views

Exploratory talks between Greece and Turkey resumed in Istanbul on Monday morning after they were interrupted in March 2016. The talks are not negotiations but a mere record of “bilateral disputes” they could discuss in the future even in the event of seeking a solution at the International Court of The Hague.

Greece has strongly reiterated that it would discuss only about the delimitation of continental shelf, the demarcation of maritime territorial limits and the Exclusive Economic Zones. Athens does not intend to discuss other issues that concern the sovereign rights.

This was repeated by the government spokesman on Monday noon.

Last week, Prime Minister Kyriakos Mitsotakis told the Parliament that Athens would not discuss issues it considered sovereign rights and would approach the talks with optimism but “zero naivety.”

The first round of exploratory talks after almost five years, the 61st since the talks started more than a decade ago, takes place after Greece extended to 12 nautical miles in the Ionian Sea and hinted it would do the same south and eat of the island of Crete.

Turkey responded with threats of “casus belli” – a cause for war – saying its position on the issue of the territorial waters in the Aegean has not changed.

Expectations are low in Istanbul, however, Turkey agreed to the 61. round of talks with the aim to avoid sanctions and to restore its relations with the European Union.

Meanwhile in Brussels, the Foreign Affairs Council is meeting on January 25-26. On the agenda will be also sanctions against Turkey as proposed by Greece, Cyprus and France.

However, Germany is blocking the list of sanctions with regards to Turkey’s illegal drilling in the Exclusive Economic Zone of Cyprus, Greek media reported on Monday morning.