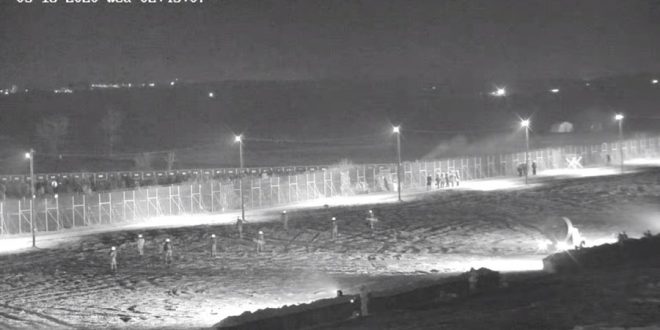 An electronic surveillance network will safeguard Greece’s borders to Turkey at the region of Evros. Equipped with radars and cameras, the network installation is underway and will include eleven pillars along the Evros river in Greece’s North-East.

The 11 pillars are along the river and the cameras have a range of 15 km within the Turkish territory, private Open TV reported in its exclusive Evros Surveillance report.

At the same time, the Greek border guards remain on high alert, while the works for the fence are progressing.

As Kathimerini reported weeks ago, at a distance that separates Sofiko Orestiada from the river delta, in Alexandroupolis, a total of 11 new cameras and long-range radar will be operational.

They will transfer an image to the Police Headquarters and to six other operational centers of the Hellenic Police, ensuring the so-called “timely frontier location”.

In other words, the border guards will be able to record the movements of people – immigrants and not only – on Turkish territory, at a distance of up to 15 kilometers from the border.

The cameras will be installed on metal poles along the border.

In each of them, apart from the camera, there will be a radar device, which will record movements on the Turkish side of the border.

The image from the cameras and the data from the radars will be transferred to four local operational centers (TEK).

Construction has already begun, one at the Police Academy in Didymoteicho and the other three at the border guard facilities in Soufli, Tychero and Feres.

Two more centers, this time regional and not local, will operate in Orestiada and at the airport “Demokritos” of Alexandroupolis. (via libre.gr)

A new magma chamber discovered beneath the Kolumbo underwater volcano, near the Greek island of …