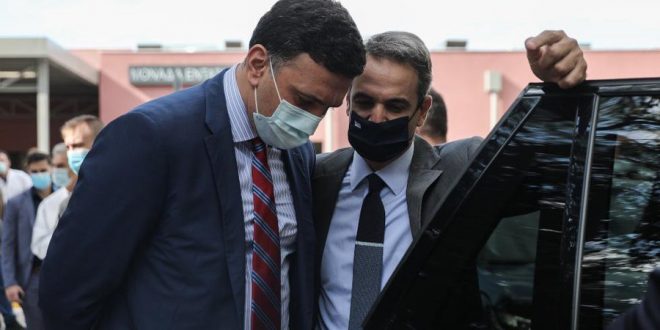 The Greek government has tabled a amendment to the Parliament to secure legal impunity for the committee of the epidemiologists advising the government on pandemic issues and well as the political personnel in charge. The regulation comes amid pressure from the opposition to make the minutes of the meetings public. The introduction to provide impunity to infectious disease committee members in charge of the pandemic measures is for sure a unique worldwide.

The amεndment was submitted by the Health Ministry in a legislation of Code of Judicial Officers of the Justice Ministry. It reportedly bears the signatures of the Health and Justice Ministers and other members of the government. It will  be voted in the parliament later on Thursday.

According to news website news247.gr, Article 4 of the amendment stipulates that “members of the National Committee for the Protection of Public Health against the coronavirus disease Covid 19, the Committee for the Management of Public Health Emergencies by Infectious Diseases and the National Vaccination Committee are not liable, not prosecuted and are not examined for opinion they formulated or vote they gave in the exercise of their duties in the context of the operation of the above committees. Prosecution is allowed only for defamation or insult.”

Particularly troubling, notes the website, is the provision that committee members are not prosecuted but can not even be questioned. It raises questions about what this means in the event that either a public prosecutor’s investigation or a possible pre-investigation committee of the Parliament is conducted in the future. In this case, it is possible that the members of the committee may not even be called as witnesses.

It should be noted that this regulation comes after the intense pressure form the opposition to make public the minutes of the infectious disease committees and also in a period of the pandemic where the decisions of the committee are extremely important. At the same time, it comes in the middle of the vaccination process and also concerns the vaccination committee.

It is worth recalling that there have already been complaints from the opposition about “conflicts of interest” between members of the committee and their professional activities, notes news247.

It should also be recalled that there has been recently a debate about the committee decisions and how much the members “obey” the government’s plans to open or close activities than the scientific dictates.

The gradual lifting of the lockdown and the opening of tourism in mid-May (unofficially on April 19) with daily infections are over 3000 and an average of 75 deaths per day while had many Greeks wonder why there was a 5.5 months lockdown anyway.

PS It has been often said in the past that the epidemiologists committee recommends but the government makes the final decisions.

In simple words, should there ever be a retrospective review of how the government handled the pandemic, the Committee members can neither testify or questioned.

The government, ministers and lawmakers have immunity anyway.