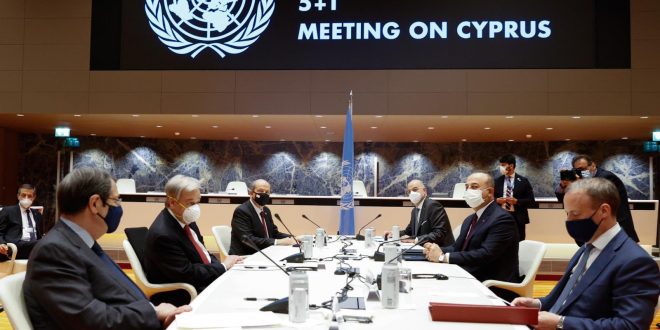 Cyprus 5+1 talks in Geneva end in deadlock, as expected

The informal 5+1 talks on the Cyprus issue ended as expected: in a deadlock. The talks on the initiative of Secretary General of United Nations Antonio Guterres and outside the UN mandate  started in Geneva on Wednesday and ended Thursday noon.

Guterres said after the talks that there was not enough common ground to resume peace talks between estranged Greek and Turkish Cypriots.

“They believe that efforts to negotiate the bi-zonal, bi-communal federation have been exhausted. They believe the Turkish Cypriots have inherent sovereign equality and is an equal international status and the solution in their view should be based on two states cooperating with each other.

Similarly, the position expressed yesterday by the Greek Cypriot delegation was that negotiations should resume from where they left off in Crans Montana. They should aim to achieve a settlement based on a bi-zonal, bi-communal federation with political equality on the basis of relevant United Nations Security Council resolutions, the Joint Declaration of 2014, the existing body of work, the six elements I presented in Crans Montana, and in line with the EU acquis,” Guterres said at the press conference, among others.

My agenda is very simple: strictly to fight for the security and well-being of the Cypriots, of the Greek Cypriots and the Turkish Cypriots, that deserve to live in peace and prosperity together," — @antonioguterres at the end of #CyprusTalks. pic.twitter.com/lTIJ1sN6Q3

President Nicos Anastasiades said after the talks concluded that Turkish Cypriot and Turkish positions for the resumption of talks violate the UN mandate for a settlement.

The Turkish side, in violation of the parameters set by the UN for a Cyprus settlement, had insisted any talks should focus on recognition of their sovereign rights and two states.

Turkish proposals for a two-state solution to resolve the division of Cyprus are a clear violation of United Nations resolutions over the divided island and will never be accepted he added.

Greek Foreign Minister Nikos Dendias said that the efforts of UN Secretary General should continue in the direction of bizonal, bi-communal Federation

The Turkish side said that Cyprus talks meaningless without sovereign equality.

Informal 5+UN meeting has concluded.
-Fully supported #TRNC's vision for two-state solution based on sovereign equality.
-GCA&Greece did not bring a new vision&insisted on their outdated position.
-Will continue our determined stance to defend the rights of Turkish Cypriots. pic.twitter.com/xpfKtvX2lY

PS The Turkish Cypriot side can wait to eternity for “sovereign rights” and that is for as long as it remains under the illegal occupation of Turkey.