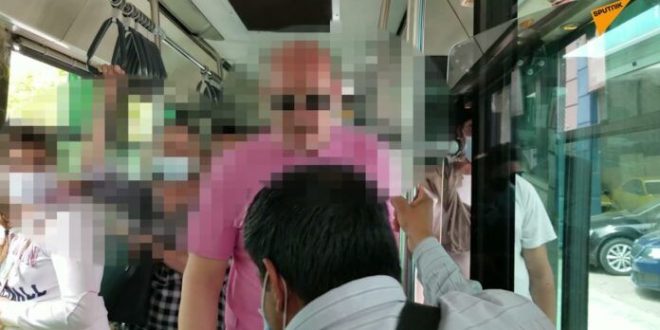 A racist incident took place on a public bus in downtown Athens when the bus driver bullied a foreign national for keeping a vacant seat next to him as dictated by the measures against the pandemic.

The tension started when a passenger on an A11 bus asked the foreign national to give free a seat next to him.  Despite the pandemic measures of social distancing, the woman insisted on the empty seat arguing  that it does not make sense to remain vacant, especially when the rest of the bus is full.

She asked the driver to intervene.

The driver stopped the bus and reached the back of the cabin.

In a recorded video exclusively obtained by Sputnik, the driver is heard saying “Get up and let the lady sit down, I am in command here.”

During the driver’s bulling, other passengers are heard urging the young man to “get up.”

The incident ended after the foreigner got up from his seat against his will and got off at the next stop.

So far, there has been no reaction or official statement by the company that runs the public buses, the Athens Mass Transit System OASA.

UPDATE: Meanwhile the OASA said that it investigates the issue.

In a statement the company said it has launched disciplinary investigation and condemned such behavior that by no mean complies with its values. “Sanctions will be very heavy, if proven that he is involved,” the statement added.

Speaking to Mega TV, the driver attempted to justify his behavior saying that he asked the migrant to get up so that the woman who had a health problem could sit. He added that he had “no racist motive.”

Would the driver be equally rude if the young man was looking “Greek”? Hardly…