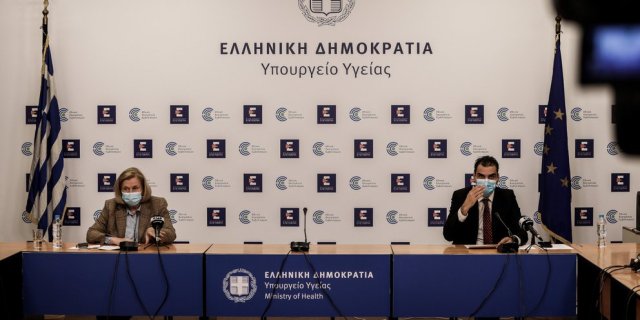 The Greek National Vaccination Committee has changed its policy and strongly recommends that the AstraZeneca vaccine be administered to persons over the age of 60, its chairwoman Maria Theodoridou said on Monday during a regular coronavirus pandemic briefing.

The pediatrician said that AstraZeneca’s vaccine is currently being administered to people 30 years of age or older.

According to the committee, those who plan to have their first shot should be allowed to choose among the other three manufacturers available, while those who have received the first AstraZeneca dose already should continue with the same.

Justifying its decision, the committee chairwoman said there are adequate numbers of vaccines for the Greek population and the epidemiological picture is good, with a continuing decrease of infections.

People who have booked their appointment for the first dose of AstraZeneca will be able to choose one of the other three available vaccines, if they wish to.

The committee however recommended that those who have already done the 1st dose of the vaccine and have an appointment for the 2nd dose do not have to change jabs, as the possibilities of side effects are extremely rare, she added.

This recommendation may be changed only in incidents of thrombosis  in those who have taken the first dose.

At the same briefing, Health Secretary General Marios Themistocleous said citizens aged 18-24, the last group in the rollout appointments for coronavirus vaccines, will be able to set appointments for vaccination as of Wednesday, June 16..

Referring to AstraZeneca recommendation Themistocleous said that although the recommendation does not prohibit younger people from going ahead with the particular manufacturer, they will be generally be administered Pfizer, Moderna or Johnson & Johnson vaccines.

He noted that those who have contracted a coronavirus infection should be vaccinated six months later; if they have already set up an appointment, they should cancel it. The same holds true if someone has already contracted the illness and later been administered one dose: they should cancel the second appointment. They will be issued a vaccination certificate anyway, he asserted.

He noted that if people had severe side-effects after the 1st dose, the person’s doctor can apply for change of the vaccines for the 2nd dose.

He added that  if a traveler has had the first dose of a vaccine administered abroad, he can have the second one in Greece. He said they should first register their vaccination by submitting documents for the 1st dose. They have to seek a Citizens’ Service Office KEP. He clarified, though, that this refers to Greek citizens.

He announced that those who are confined at home or bedridden will be administered the Johnson & Johnson vaccine by private doctors contracted by the state. This will begin at the end of June, he said.

Responding to a journalist question, he said he had no data about how many people with temporary AMKA have been vaccinated. He estimated some 10,000 people. He refrained from given any information about temporary AMKA requests that have not be satisfied until now.