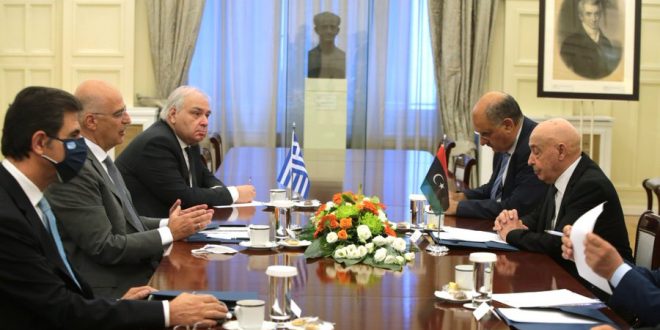 “All foreign forces and mercenaries must leave the territory of Libya” was sent on Friday during the Greek Foreign Minister Nikos Dendias and the Speaker of the House of Representatives of Libya, Aguila Saleh said in a joint message on Friday.

“What is needed – and you represent it in the clearest way – is to allow the Libyan people to express their overriding will in the elections. And in order for this to happen, all foreign forces and mercenaries must leave the territory of Libya,” Dendias underlined.

He assured that Greece will do everything it can to help in this direction.

Regarding the maritime borders agreements between Turkey and Libya, Saleh made clear that “the Presidential Council, whose term has expired, did not have the power to conclude any agreements or memoranda that have not been ratified by the House of Representatives.”

The House of Representatives rejected the ratification of such an agreement, declaring it invalid, he added.

Regarding the importance of the Mediterranean as a safe route for trade, Saleh said that “the Greek and Libyan people can ensure peace” and stressed that “there is a huge difference between one who defends his homeland and the right to life and to anyone who wishes to impose his hegemony on another country and seize the property of that country.”