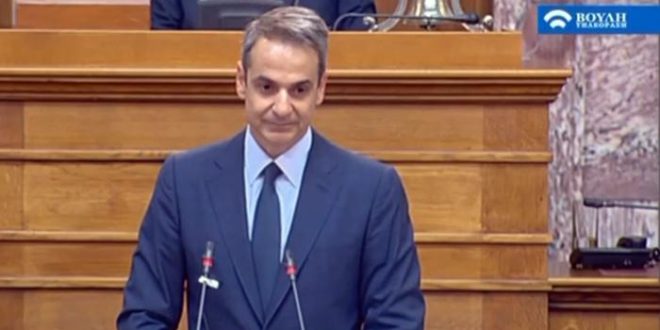 “Prime Μinister Kyriakos Mitsotakis reached a limit up in vulgarity speaking in parliament on Wednesday,” SYRIZA-Progressive Alliance spokesperson said on Thursday, speaking to SKAI TV. Spokesperson Nasos Iliopoulos referred to one of Mitsotakis’ unprecedented statement during his briefing regarding the wildfires management in the month of August.

Speaking about the management of the fires, the PM apparently could not resist to refer to the fire disaster of Mati in 2018 where more than 100 people lost their lives, a tragedy he politicized as one of his main slogans against SYRIZA to win the elections a year later.

Comparing the management of the wildfires in summer 2018 and 202, Mitsotakis said:

Furthermore he provocatively told the fire-stricken communities “they cannot demand to have a fire-fighting helicopter hovering over each of their houses.”

Spokesman Iliopoulos described the comparison coffins with acres as “vulgarity.”

“The prime minister managed to say the greatest vulgarity ever heard in Parliament, to compare human lives with burned acres, something really inhuman,” Iliopoulos said.

He also accused the PM of  “not being ashamed to wag his finger at the people that lost their property in the fire,” and criticized him for the “miserbly sexist behaviour” against the KINAL leader Fofi Gennimata.

In an effort to downgrade everything I said and trying to say that I don’t understand and that as a man he  is obliged to explain to a woman what she doesn’t understand, Mitsotakis did mansplaining. He ought to apologize. Because I know every well how aircraft works and how the forests are cleaned.”

Furthermore, Gennimata noted that the PM refrained to give any response to her question about how many aerial means were available and how they were used against the fire in northern Evia, something he ought to have done.

PS Taking into account the cynicism of the PM and his government, I wouldn’t be surprised if in next political poll would include a question like” “Do you prefer coffins or burned acres?”