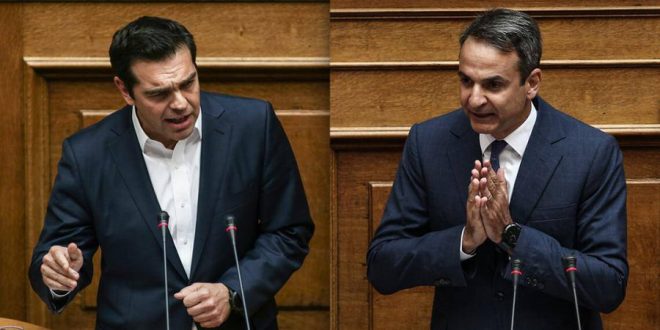 Greece’s main opposition left-wing SYRIZA demands the establishment of a Parliamentary commission that will investigate the funding of media by the conservative government and thus with taxpayers money. The Committee should investigate “repeated acts of manipulation of public opinion by the Mitsotakis government with money of taxpayers, who on their part were objects of such manipulations,” SYRIZA wrote to its proposal.

Making use of a recently revised article of the Constitution according to which the opposition is given the right to submit proposals for the establishment of inquiry committees. SYRIZA accuses “the government and the Prime Minister personally that in the outbreak of the pandemic he found the opportunity – citing “state of emergency” – to generously promote unprecedented amount of funding to the media – around 42 million euros – in “fast track” procedures with completely opaque procedures and without objective, non-political, criteria (direct negotiation, without publication, invitation lasting a few days, etc.).

According to cnngreece and other media on Monday afternoon, in its proposal signed by the whole Parliamentary group pf the main opposition party, SYRIZA calls for the investigation of “the criteria according to which about 42 million euros were given to media, from the so-called “Petsas Lists” 1 and 2, the  failed vaccination campaign by the Health Ministry, the financing of EnterpriseGreece for an international campaign of the government, as well as the public funding of the owner of the polling company OpinionPoll, the results of which the government majority has refused to control in the Committee on Institutions and Transparency of the Parliament, despite the request and the irrevocable relevant data submitted by the official opposition.”.

Referring to the scandal of the media funding in Austria and the resignation of Chancellor Sebastian Kurz, SYRIZA points out at that “such practices are being devalued by European public opinion and the institutions.”

The proposal by SYRIZA sets also the other opposition parties such as KINA/PASOK, KKE, MeRa25 and Greek Solution before their own responsibilities. The signatures of 2/5 of the 300 MPs at the Parliament are needed for such an inquiry committee to be established.

If the investigation proceeds the former government spokesman will have to justify to Parliament and the public according to which criteria an opposition newspaper was funded with 40,000 euros and a government-affiliated one with 300,000 euros.