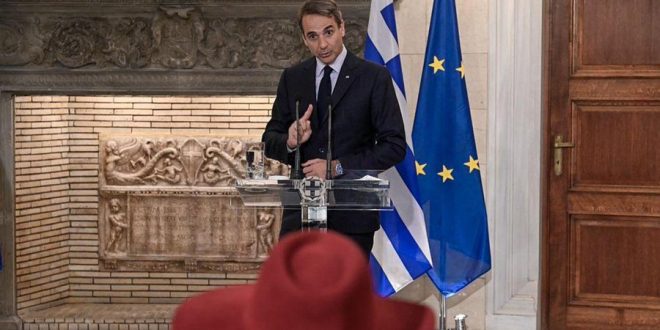 A bold question on pushbacks posed by a Dutch journalist to Greek and Dutch prime ministers during a press conference had Kyriakos Mitsotakis “see red”. He felt insulted also in the name of the “Greek people” and losing his temper he furiously advised correspondent Ingebor Beugel that in Greece’s we don’t have the culture of asking direct questions to politicians.

Incredible footage of the Greek PM shouting at a Dutch journalist, after she said he lied over refugee pushbacks.

He's not used to tough questions from the local media. Greece only beats Hungary on press freedom in the EU.

A sad sight for all of us who care about our republic. pic.twitter.com/FPmDDqzHDI

Called upon to pose a question, the journalist said to both prime ministers Mitsotakis and Rutte:

“When, at last, will you stop lying, lying about pushbacks, lying about what’s happening with the refugees in Greece? Please don’t insult mine, neither the intelligence of all the journalists in the world. There has been overwhelming evidence, and you keep denying, and lying.This is, like, narcissistic abuse. Why are you not honest? Why don’t you just say ‘Brussels left us alone, we waited for six years, nobody did anything, we need to relocate (refugees), they don’t do it, now I have my say and, yes, I do cruel, barbarian pushbacks.’ Why did you stop knocking on Brussels’ door for relocation? And for you, Mr. Rutte, what, according to you, are the sanctions that should be imposed on Greece, and maybe on Holland, for accepting this violation of human rights that Holland is co-responsible of [sic[? Also, many many municipalities in Holland want to take many refugees from Greece, like many minor unaccompanied children, they are ready to accept them, but this Prime Minister [pointing at Rutte] opposes to [sic] that. Maybe you could find an understanding and the Dutch municipalities who are so ready to unburden Greece can actually take in refugees from Greece, which his [Rutte’s] government opposes. Thank you.”

A very obviously angered Greek PM responded, while trying to fend off several interruptions from Beugel:

“I understand that in the Netherlands you have a culture of asking direct questions to politicians, which I very much respect. What I will not accept is that, in this office, you will insult me, or the Greek people, with accusations and expressions that are not supported by material facts when this country has been dealing with a migration crisis of unprecedented intensity, has been saving hundreds, if not thousands of people at sea. We just rescued 250 people in danger of drowning south of Crete, we are doing this every single day rescuing people at sea, while, at the same time, we are intercepting boats that come from Turkey, as we have the right to do in accordance with European regulations and waiting for the Turkish Coast Guard to come and pick them up and return them to Turkey. So, rather than putting the blame on Greece, you should put the blame on those who have been instrumentalizing migration systematically pushing people in(to a) desperate situation from a safe country, because I need to remind you that people who are in Turkey are not in danger, their life is not in danger and you should put the blame on others and not us. We have a tough, but fair, policy on migration, we have processed and given the right to protection in Greece to 50,000 people, including tens of thousands of Afghans, in accordance…Allow me. Have you visited the new camps on our islands? Have you been to Samos? … No, you have not been…Please…Look, you will not come into this building and insult me. Am I very clear on this? I am answering now and you will not interrupt me, in the same way that I listened to you very carefully. If you go to Samos, you will find an impeccable camp, with impeccable conditions, funded by EU money, with clean facilities, with playgrounds for…the children to play, no comparison to what we had in the past. This is our policy, we will stand by it, and I will not accept anyone pointing the finger to [sic] this government and accusing it of inhumane behavior.”m responded: “I know that in your country you can ask questions directly. I will not accept you insulting me in this building. I do not want you to criticize me with expressions and charges that are not supported by facts as far as the migration issue is concerned. We have saved thousands, 200 people were in danger of drowning south of Crete, and we are saving lives on a daily basis. At the same time, we are also blocking flows from Turkey and call on their coast guard to return them. So instead of blaming Greece, you should blame those who take advantage of human beings.”

The Greek prime minister continued, “We have a very tough but very fair policy on the migration issue. A total of 50,000 people have arrived in Greece, of whom 10,000 were Afghanis who have received asylum. Have you ever been to Samos? You have not. You cannot come to this office to insult me. If you go to Samos, you will find a very good facility with healthy conditions, play spaces for children, and nothing related to what we had in the past. I  will not accept anyone shaking their finger at this government and criticizing me as well.”

Rutte defnded Mitsotakis recalling that Greece has promised to EU to investigate the allegations. He said, among others: “I am absolutely convinced that this Prime Minister and this government is applying the highest standards and the fact that they have immediately launched an investigation on the issue of the pushbacks is testimony of that.”

Just a few hours after the incident, government ministers and well-known journalists in the country came out to defend the Greek Prime Minister and accused Beugel of “being Turcophile”, adopting and spreading the Turkish propaganda on the alleged pushbacks.

“We are all only proud of the response of the Greek Prime Minister Kyriakos Mitsotakis to the rude and unjust journalist from the Netherlands! Well done, Mr. President [of ND]!

Dozens of Greeks commented under Georgiadis’ post that they were not proud at all especially about the PM not allowing direct questions by the local media.

Journalist and publisher Nikos Chatzinikolaou wrote:
“The pro-Turkish Dutch journalist received a staggering response by the Greek Prime Minister to her vulgar lies! And those who, in order to make opposition and gain party benefits, adopt the miserable Turkish propaganda at the expense of our country, are unacceptable! Shame!”

The chorus line was immediately joined by mainstream media and websites with zealous reporters digging in the present and the past of the Dutch journalist and articles with “earth-shattering” titles “Who is The Journalist” who has been living on a Greek island for the last 40 years.

A heated debated inflamed on Twitter with a part of the community supporting Beugel and criticizing PM’s attitude towards media expecting by them only pleasant questions. Some wrote “the king is naked”, an “autocrat” and compared him with Trump, Erdogan and Putin when it comes to unpleasant journalists’s questions.

Another part of the twitter community has been swearing at her as “spinster”, “Turcophile”, “rude” just to mention the most “harmless” ones.

Hashatags #Ολλανδεζα and #ολλανδη have been trending on Twitter still on Wednesday, where meanwhile the dispute escalated to angry exchange of posts between ND and SYRIZA politicians.

Caricaturists picked up the issue and news websites like news247.gr commented on the “Caricature of the Day”: “And generally speaking, who told you to ask questions as a journalist?”

caricature by @kourafelkythros on Greek journalists asked the PM in the past which is his favorite food prepared by his mother: “You should be ashamed! Do we send Greek journalists to Holland to ask the PM if he likes dolmadakia*?”

The incident between the Greek PM and the Dutch journalist made it to international media with reuters recalling that “Beugel was referring to allegations by rights groups and organisations including the United Nations’ refugee agency UNHCR that Greece is unlawfully pushing asylum seekers back to Turkey on its land and sea borders, a practice Greece denies.”

PS if you ask me, as a journalist you don’t openly accuse a Prime Minister of “lying” and as a Prime Minister and leader, you don’t lose your temper in front of cameras and you don’t expose yourself by teaching journalists what kind of questions they should ask especially on delicate and controversial issues.