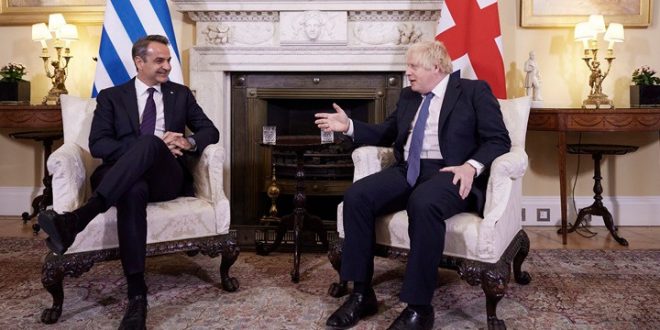 The return of the Parthenon Marbles to Greece was one of the key issues Prime Minister Kyriakos Mitsotakis intented to discuss with his British counterpart Boris Johnson at the meeting on Tuesday afternoon in London. It came as expected: the Greek PM made his request for the reunification of the Sculptures, the British PM rebuffed saying it was not up to his government to decide.

“Our request is not a flare. We will insist methodically to build the necessary foundations and to the British public opinion on the need to reunite with the Sculptures of the Acropolis Museum,” Mitsotakis reportedly said.

Johnson replied that the issue of the Parthenon Marbles was one for the British Museum to decide and not for his government.

Speaking to reporters after the meeting, the Greek PM said “it is an important issue concerning our bilateral relations,” and assessed that “it is not only a legal issue, it is primarily a value and political issue.”

He assured that “we will use all means to achieve our goal.”

According to Alpha TV reporting from London, the Greek government is preparing a campaign to brief the British public on what the issue is about.

Meanwhile, The Times newspaper revealed that Mitsotakis to offer an “exhange” for the return of the Marbles two emblematic artifacts on loan: the Golden Mask of Agamemnon and the bronze statue of Poseidon (or Zeus) of Artemisio.

The newspaper noted that there were discussions between officials of the Greek Culture Ministry and their British counterparts and that Mitsotakis would raise the issue during the meeting with Johnson.

Worth noting that in December 2020, the Greek Culture Ministry submitted a law amendment that would allow it to “export museum collections including antiquities” and even “an entire monument” to museums or “similar places” abroad for a period of up to 50 years.

So far, it remains a “secret” whether the Greek PM was wise enough to not proceed to such an offer or  he did proceed… Yet, nevertheless, Johnson who is a Philellene and quoted Lord Byron when he met Mitsotakis today was apparently not impressed.

“The Prime Minister (Johnson) said that he understood the strength of feeling of the Greek people on this issue, but reiterated the UK’s longstanding position that this matter is one for the trustees of the British Museum,” a statement by Downing Street said.

“This contradicted Mitsotakis, who said last week the issue was a matter for negotiation between the two governments,” reuters noted.

The British Museum says there are no current discussions with the Greek government on the issue. It says Elgin acted legally when he removed the sculptures from Athens, and they are “a vital element in this interconnected world collection,” the news agency added recalling Johnson’s statement last March that the sculptures “were legally acquired by Lord Elgin under the appropriate laws of the time and have been legally owned by the British Museum’s trustees since their acquisition.”

The Greek PM underlined that he would continue to engage both the British government and the British Museum on the issue.