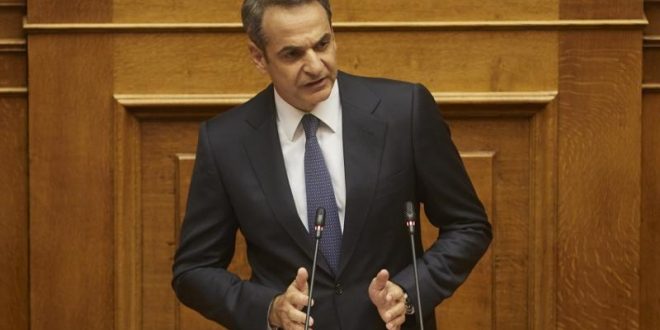 Greek Prime Minister and obviously wanna-be-medical-doctor Kyriakos Mitsotakis surprised medical staff at hospitals on Wednesday when he claimed that “ICUs are in fact “unnecessary” as there is no medical “study that there are more deaths of intubated Covid-patients outside ICU than inside.”

“Yes, there are intubated [Covid-patients] outside the ICUs. They are in beds if increased care. Do we have evidence that we have higher mortality among these patients? I do not have … If you have to bring it over,” Mitsotakis told the Plenary of the Palriament on Wednesday during a debated ahead of the voting on the ‘mandatory vaccination of those over 60 and the 100 euros fine.”

Mitsotakis was responding to the opposition criticism that he refuses to take responsibility of the pandemic, he does not do enough – anything, at all – to strengthen the National Health Care system amid the 4th pandemic wave and he chooses the mandatory vaccination instead.

The PM’s unscientific claims not only triggered outrage among the opposition parties and social media users, harsh criticism came also from doctors who are on the front line of the fight against the pandemic.

Nikos Kapravelos, director of the 2nd ICU of “Papanikolaou” Hospital in Thessaloniki, clarified: “There is no treatment outside the ICU. Not only is such treatment downgraded, it is dangerous The patient has no luck outside the ICU. Absolutely none! ”

Neurosurgeon of the General State Hospital of Nikaia and secretary of hospital doctors federation OGNE, Panos Papanikolaou referred to a study by Greek ICU doctors published in 2020. In this study (read the study here in English) it was reported that there is a lower mortality rate in ICUs than among those patients left out of Intensive Care Units.

“Our cohort consisted of 151 unique patient intubations, of whom 74 (49%) patients were transferred to ICU within a median of 0 days (range 0-7). Compared to patients who remained in the wards, patients transferred to ICU had lower in-hospital and 90-day mortality (65% vs. 97%, and 70% vs. 99%, respectively, p<0.001 for both). Amongst several possible predictors of survival in the ICU, sequential organ failure assessment (SOFA) score at the time of intubation had the best prognostic accuracy with an AUROC of 0.818 and 0.855 for in-hospital and 90-day mortality, respectively. A baseline SOFA score ≤8 had a 100% sensitivity for survival prediction in ICU. However, out of 26 patients with SOFA score ≤8 who remained in the wards, only one survived, whereas 19 patients with SOFA score >8 who were transferred to ICUs received futile care” Study in English here.

According to official EODY data (which are not in detail), from Oct 1- Nov 30 a total of 3,300 Covid-patients died in the country. Discharged from the ICU as “healthy” were 350. This can roughly means that one in ten can be be saved. Of course, there are other crucial criteria such as late intubation or not all, many die outside the ICU.

Or as the PM indirectly said: same mortality rate whether in ICU or not.

Speaking to “Sto Kokkino FM, Papanikolaou stressed that Greek “hospitals urgently need the recruitment of doctors and nurses, the requisition of ICU beds in big private hospitals.” He added that at a meeting of the union on Wednesday, all hospital doctors agreed on that independently of  political preferences.

“When the prime minister himself goes to Parliament to justify the devastation he has caused and he presents himself as a denier of Intensive Care, as a denier of medical science, it is obvious that he has adopted a defensive line of panic because he now understands that there are ‘state assassinations under government responsibility,’ Papanikolaou said using unprecedented harsh words.

In the Parliament, the Prime Minister went even a step further and revealed that he has asked experts to examine and approve a decrease in the interval between the second vaccine dose and the booster shot, possibly even to four months.

This prompted on of the few opposition newspapers in the country, efimerida tvn syntakton,  to come up with a front page entitled: “Now He is a Doctor, too!.”

Thursday morning, the government spokesman left open the possibility for the mandatory vaccination to other groups of the society as well.

Meanwhile, it seems that next to the PM, there are also cabinet ministers who claim to know better what an intubation is. Interior Minister Makis Voridis, a lawyer, told Skai TV that “intubation is a simple medical act of inserting a tube into the patient.”

PS God, please, save us from laywers performing intubations and leave us die there in a hospital corridor outside the ICUs without surveillance and from prime ministers who are surrounded by false prophets, irresponsible consultants and petty fawning flatterers.

Youngest cat just asked whether they’re not ashamed to make such statements to cover up their failures.