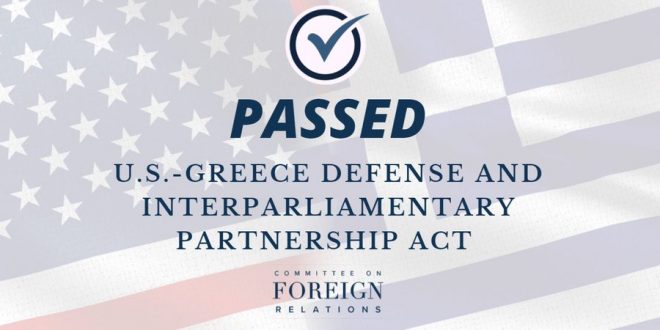 The US Congress passed the US-Greece Defense and Inter-parliamentary Partnership Act opening the way for the purchase of F-35 fighter jests in the future by Greece. The move was welcomed by Senate Foreign Relations Committee and the Greek Foreign Ministry.

– The US should, as appropriate, support the sale of F-35 aircraft to Greece.

= Greece is pillar of stability in the EastMed and the US should remain committed to supporting its security and prosperity.

– The US should increase and deepen efforts to partner with and support the modernization of the Greek military.

– It is the sense of Congress that the President has the authority to expedite delivery of any future F-35 aircraft to Greece once Greece is prepared to move forward with such a a purchase on such terms and conditions as the President may require.

– The naval partnerships with Greece at Souda Bay and Alexandroupolis are mutually beneficial to the national security of the United States and Greece.”

We express our deepest appreciation for the passing of this Act, which bears testimony to the unique relationship between our two countries.